Tuesday May 3: Woke at 6, had a granola bar and tea from the thermos, and slowly motored out Broad Creek and down the cut toward the southern Banks. The morning mist kept everything wet and cool. Before going a mile I came upon a dredge that spanned the whole width of the cut. As I got closer it (I didn't see an operator) started to swing its long drag arm out of my way and I passed as it thumped in the stillness. We passed large haul-out marinas and houses lining both shores. Every yard had a large bulkhead usually made of rip rap. The need became apparent as I passed large motor yachts that even those who slowed considerably, sent exploding wake splashing against the edges. Annie needed to catch them on the port quarter and I just held on. 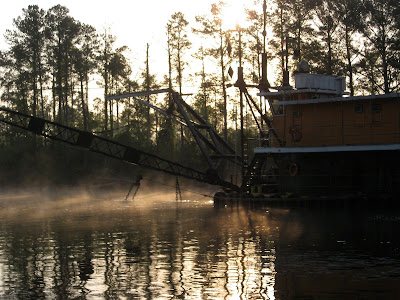 Continuing south, we passed under the US70 bridge and followed a channel SE to Beaufort. Tied up at the City Dock and quizzed the dockhand about the approaches to Cape Lookout. He said that the SW wind was picking up but if I headed out I would have a good run offshore. Just what I wanted to hear.
The tide was running out fast and the SW wind opposing. Just like a washing machine. Noticed fishing boats near shore to the east and reached over with a half-raided board. Good move... it was a wonderful 2.5 hr. broad reach to the Cape.

Passed through the opening to the inside of the bight and anchored on the SW corner in the lee of a dune. After tidying up I sailed across the cove and reanchored along the Shackleford Banks shore. I waded in and followed wild horses as they grazed. There was a group camping on the beach and I found shells to take home. We sailed back to the first anchorage, cooked dinner in the cockpit and turned in early. 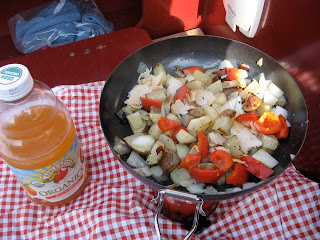 Hot food for a hungry guy
Posted by Curt at 9:22 AM