I have started to look at a November trip to Cayo Costa. My sailing friend Terry and I are planning to take Annie down the 2nd week and set off to explore the islands around Charlotte Harbor. From St. Augustine, it is a good 5-6 hour drive through the middle of the state. It will most likely still be warm there and the blue water, white beaches, exotic flora and good fishing make for a tempting adventure.

My friend Ron (WaterScribe) is leading a group of West Coast Trailer Sailors the week after but with other commitments that time slot was out for us. I am interested in tapping Ron's knowledge of the area.

Good luck Steve and Spartina on your trip up the Chesapeake!

Posted by Curt at 8:58 AM 3 comments:
Email ThisBlogThis!Share to TwitterShare to FacebookShare to Pinterest

Bro on the Beach

Last week my brother and sister-in-law came for a 5 day visit. They were just getting their twin boys off to college and needed a vacation. Chris builds sound studios in New York and Julie has a popular cafe where they live in the Catskills. With winds at 0-5. Ellie and I joined them in the decision to "just hang out at the beach". 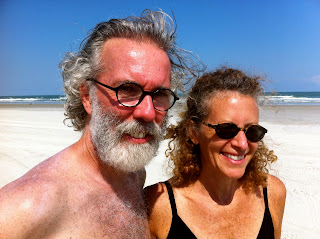 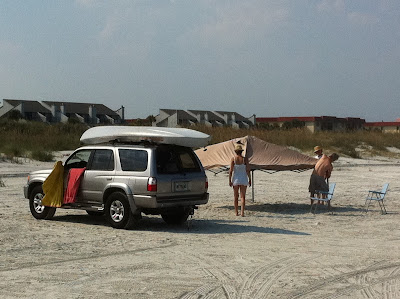 We found a quiet stretch and set up our tent. On the second day we returned and Chris and I headed out on my sit-on-top kayak. The waves had settled down at low tide and we picked a calm set to head straight out. We made it through about 5 waves and felt we were clear. Wrong. A large one started building way out and by the time it made us we weren't going to make it. I told Chris to dive into it and we came out the other side as the kayak shot to the beach.

We both still had our paddles. He wore a ski-type vest and I, a self-inflatable. Being so far out and swimming hampered by the paddle, I inflated. The cartridge fired off and filled the vest. Very full. It felt like two cantelopes mashing against my ears. I side stroked with the paddle in hand and eventually started catching waves toward shore. Holding the paddle parallel to the waves let me use their force to my advantage. Eventually we both made it to the shore. The girls had grabbed the kayak and were glad to see us. 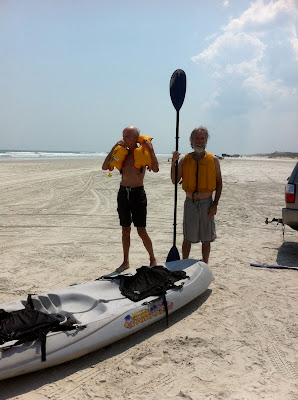 What I took away:
1. It is smart to wear a life jacket.
2. The self-inflator was the large size and forced too much air in the vest. By pushing down the valve at the top of the manual 'blow' tube you can release air while swimming. And blow more in if needed.
3. If you need to loose a paddle to swim.... they have more at the store. 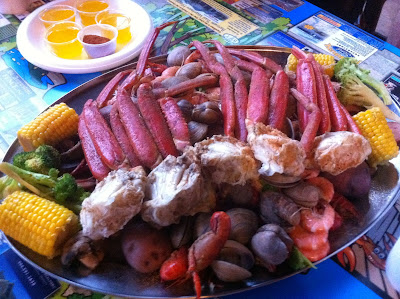 It was a great visit and a couple of long, restful days at the beach. Oh and did I mention the steamed platter at Outback Crab Shack?!
Posted by Curt at 3:17 PM No comments:
Email ThisBlogThis!Share to TwitterShare to FacebookShare to Pinterest

I've been sailing since 1977. Yacht racing is new to me even after all these years. Guess I was never in a hurry. But I had a fun overnight this week. My friend Maury had entered an offshore race from Ponce Inlet north to St. Augustine... about 52 nautical miles. Another friend Eli and I were asked to crew on Maury's Bristol 29-9 cruising sloop.  Maury and Eli are from the LAMP Boatworks building traditional small craft at the Lighthouse Museum.
Maury and his wife Phyllis had Impulse built in 1977 (coincidence) and have cruised a good bit on the Chesapeake before moving to Florida. The name comes from the fact that the decision to purchase was made in a couple days. It's been a good decision for them for 34 years and counting.
We started at 1810 Friday with the other Cruising class boats. The Performance and Spinnaker classes were 10 minutes out ahead and pulled away. Wind was out of the east sailing north on a 90 degree beam reach. The set course carried us a bit east of the rhumb line to the St. Augustine sea buoy but we were making good time in the sea conditions. Waves were a couple of feet with a choppy interval. Most of the faster boats reached farther east and ran in in the early morning hours before the wind backed around more to southeast and dropped off. Maury wisely decided to start the downwind run earlier than a number of other cruising boats and we made the sea buoy at 0733, 13 hours and 23 minutes. A couple of boats dropped out finding themselves to far east or south when the wind dropped and the confused seas made it futile and uncomfortable.
It was a lot of fun. I enjoy a stiff breeze and comraderie but I'm still a backwater, dreamy get-there-when-you-get-there kinda' guy. Nevertheless... thanks guys! 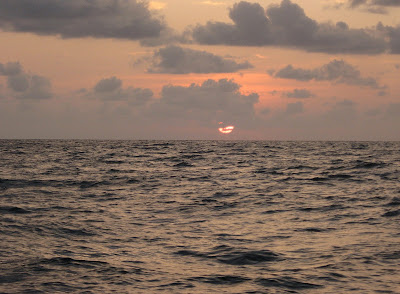