Ellie and I drove to the Bay yesterday to pick up some gear that I needed to prepare for this weeks trip. First we traveled to Deltaville where the maritime Museum was having the year's opening weekend. Food, vendors, antique cars and historic boats in the water made for a nice day in the sun. John Barber was on hand with new prints to sell and two buyboats, including the museum's F.D. Crockett, were on the docks ready for "inspection". We took a ride on a restored oyster deadrise up Jackson Creek. I was particularly interested in seeing the approach markers leading in from the Piankatank River where I will be crossing over this Thursday at the beginning of my Chesapeake trip.

Deltaville Maritime Museum is a true testament to local pride and volunteerism. The museum burned in 2012 and new buildings are up and they are on their way back. I look forward to finding a way to help out.

Yesterday I drove over to the Bay. Spring is coming on hard, the pollen is almost gone and the brown has turned to green almost overnight. After picking up supplies in Gloucester and sorting out gear onboard I launched Annie into a stiff onshore wind. Maybe 15 knots at the time and quick about face at the launch readying for a safe cast off. Hailed the Milford Haven bridge tender on channel 13 and slipped through as the she swung around, bell dinging. Under full jib and mizzen she broad reached into Hills Bay and on to the Piankatank. It was later than I would have liked so we came about and got wet. Lots of white caps and short chop. Short, then long, then short tacks back to the bridge never touching the double reefed main lashed to the deck. 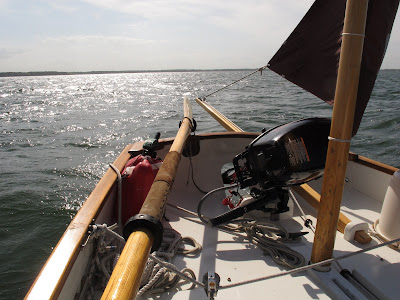 I remember another log entry long ago. I had spent a leisure couple of days in Beaufort, North Carolina. I was 29 and still a bit green. The weather was beautiful and I decided to head south offshore. After clearing the last sea buoy I eased the 24' wooden sloop's jib sheet and started running south. Had planned to raise the main but the wind was fresh and as I headed up the chop became very apparent. About 4 feet and knarly. No way to raise  an unreefed mainfor a green single hander even hove to. Without the main I couldn't make headway and after about a nasty half an hour I decided to run south. It was 1630.

The wind slowly picked up out of the northeast as night fell and the rollers grew. Radar reflector in the spreaders, dinghy riding well on a long painter, one wash board in, and 14 hrs at the tiller as we rushed forward and up and then down into the dark. The waves grew to 10 feet and as the eery white glow of dawn set in I turned her a bit to starboard and started searching for a sight of land. Then it happened.

For a second it was all different. The feel. I quickly looked over my shoulder and saw the wave break, the painter snap and the dinghy disappear. I thrust the tiller hard alee and she spun into the next wave and we were back in the familiar up and down rhythm. My heart was pounding. Water had filled the cockpit and was slowly going down the thru-hull. Water had breeched the washboard and I stooped to pump the Gusher. As we regained stability I reached for the VHF and called the Coast Guard. The operator asked if the shore was visible and I noticed what seemed to be a condo with three vertical stripes. He identified it and said that I was approaching Masonboro Inlet above Wrightsville Beach. There would be a large rock jetty protecting the inlet and that I was to stay as tight to it as possible as I turned in.

In about 15 minutes I saw it. Waves were crashing over and it came up fast. I started the old 2-cylinder... always a bit suspect.. and closed in. As we turned sharp at the point we dropped. It felt a bit like a roller coaster drop. And then calm.

The tide was dropping and it was all she could do to make way into a protected area. I went forward, dropped the jib and the anchor, and fell on the wet bunk below sheathed in foul weather gear. 80 harrowing miles, a lesson learned.

These days I am hopefully more prepared with more manageable gear and better planning skills. I need to remember this story. I will need to turn into the wind again.

Drawing boats can be a challenge especially when you want them to have soul. There's the curving lines, foreshortening, and heaving postures in moving water. Some people, like my old friend Buckley Smith are able to do it without much effort. He was pretty much a sailor of the same ability.

Sketching for me goes back to childhood with maritime drawing coming much later. The great awakening came in 1979 sitting on a dock in southern Maryland. My friend Neil, who I had bought my boat Quelle from, asked me to come up from St. Augustine and help him design and build out a restaurant in Solomons Island that he was going to lease. I prepared Quelle for my absence and headed north. I arrived to find Neil and the owner in a squabble over the lease and I was left with my hands in my pockets. I had purchased a copy of the popular Drawing on the Right Side of the Brain and dove in. After many exercises in the book I started to see better and my drawing improved. After decades of concept drawings in my design work, sketches for painting in exotic lands, and now in my maritime painting ... I still think back to those days on that Chesapeake dock when I was lucky to have "nothing to do".

Although it is still cool in Virginia the weather is quite mild in Florida as you might expect. My sailing friend Terry was in Cedar Key on the Gulf Coast this past week and sent this picture of himself aboard his boat Quest. Looking forward to hearing about his adventure. 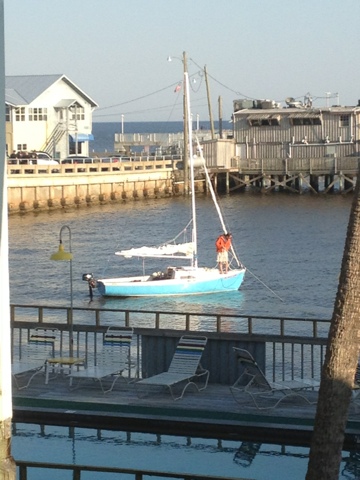