I awoke snug in the Crockett's forepeak. It was extremely wet and muggy outside and the little bulkhead AC had somewhat dried me and my foulies. I climbed out, unlocked Annie and made ready for a crisp run north. We were heading out the entrance at 0830 and meandered east at 2 kts in a light breeze. Passing Windmill Point at the entrance to the Rappahannock a dense fog set in. It didn't last long to my liking. The SW wind picked up a few knots off Fleets Bay. The sun peaked out around 1300 and we slowly tracked on.

The wind and sun came up and out beautifully, I started reaching aimlessly. Balancing the sails we wandered back and forth in the Bay. Leaving the tiller free, Annie moved along freely. Once we went for a half hour untended. Marvelous.

A long shoal running north and south to the east formed the tack point as I crossed over and back in this grand frivolity. On one outbound tack I saw a long noth-south wave coming at us. It looked like a miniture tsunami. Annie rose up and over as it moved landward. Then all at once the wave- possibly a hundred yards long- broke on the shoal. I thought of the 'Castaway' and the atoll where 'Wilson' was lost. I suppose it was a wake but I had not seen a boat in a half hour or so. Odd.

Around 1500 we rounded the shoal and started NE into the Great Wicomico River. A couple speedboats blew by and I noticed scores more on the upriver horizon. Then they were streaming by, many up the creek to Reedville and others out and into the Bay. It was a full-fledged flag-flying Trump rally. I was overcome, like stepping in a nest of ground bees.

It seemed to disperse more quickly than I feared it would and I found a quiet spot in the little Fleet Bay just south of the menhaden docks.

Posted by Curt at 3:29 PM No comments:
Email ThisBlogThis!Share to TwitterShare to FacebookShare to Pinterest

Rain On and Off

Up and out Hungars Creek to make early progress in inclement weather. Cleared entrance in fog and started WNW in 5-8 kt wind out of S. Original plan direct to Stingray Point but decided at the shipping channel to change course to SW and broad reach toward Wolf Trap Light off Mathews County. Rain started and continued until mid-morning.

Passed by Wolf Trap at 1130, tacked and broad reached NE as the tide started ebbing. Track took me offshore as I compensated with running downwind a few times. Downwind is not a Drascombe's best suit due to the boomless main and it is often a sloppy ride. Tacking downwind on alternating broad reaches helps to align the track at better angles to the wave pattern and thus a better ride with less slatting. The additional speed counteracts the longer distance.

Passing The Hole in the Wall below Gwynns Island the rain returned after a couple hours of mixed clouds and sun. I texted Vera and asked if tying up at the museum was available and she said sure and that there was a band on the hill. She said that she and John would be on the F D Crockett and that I was welcome to share their dinner.

Rain started again in the mouth of the Piankatank River. Annie plied on, unfazed. We made the entrance to Jackson Creek at 1630 and wound through the narrow, reaching the museum dock and tying up for the night. The band was good as was the shrimp, hush puppies and getting to spend an evening with friends. I opted to sleep in the Crockett's dry forepeak.

Posted by Curt at 9:33 AM No comments:
Email ThisBlogThis!Share to TwitterShare to FacebookShare to Pinterest

Up before dawn after a fitful sleep. Big meal the night before I guess. Spent the morning cleaning Annie and catching up on the log. Weighed anchor at 0845 and headed south. Windlessn motoring at half throttle, rain starting in earnest around 1030. With a SE wind predicted for Saturday I wanted to get down as far as possible to cross back over the southern Chesapeake, leaving early with Deltaville as my destination.

The sky cleared but saw only three boats the entire day until the entrance to Hungars Creek where I anchored at 1700 in between oyster claims. A very tight creek with scores of visible and submerged pilings. Pretty good protection as the wind picked up from the south in the late evening. 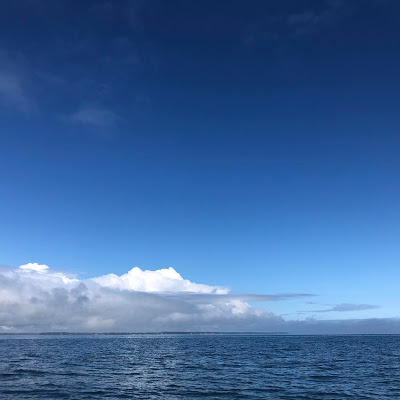 Light airs pick up in the afternoon

Posted by Curt at 7:20 PM No comments:
Email ThisBlogThis!Share to TwitterShare to FacebookShare to Pinterest

Up and out at sunrise. Steve and I headed out of the Pokomoke toward the Broad Creek cut north by Crisfield. I had considered continuing N to the Chester River but with the wind picking up and having new places to explore I said goodbye and turned south. Tacked close-hauled on SW 10-12. Motorsailed when needing to stay upwind and offshore, and made the Onancock Creek outbound buoy by taking several long and short tacks. Turned east and motored up the long creek. Anchored in South Branch with a number of large cruising boats.

After a bit of sorting and a rest I went over and tied up to the town wharf and walked into town. A little bougie but pleasant. I ordered a fish sandwich and fries to go, took it back to Annie and returned to the anchorage for dinner. Calm, drizzly evening with early turn in.
21.5 n miles

Up at first light and watched as Steve struck his tent. He sailed by and said he was headed east to the Pokomoke Sound. Wanting to rest up longer I stayed, cooking breakfast, sorting gear and let the cockpit tent dry before storing. These times down below looking at the calm water as the sun warms the deck are some of my favorite moments. It ties me to my personal sailing heritage that has given me much.

Cast off 0845. N wind and beam reach E across Tangier Sound. Crossed over bar south of Fox Island mapping coordinates between the GPS and the chart to miss shallows. Nice reach into Pokomoke Sound and on to the west end of Robin Hood Bay. Anchored for lunch and received text from Steve that he was working toward Ape Hole Creek on the north shore of the bay back to the W. Having planned previously to head N after wind changes I tacked WNW into the wind and tide. Made good progress but opted to motor sail the last mile in order to anchor in daylight. We rafted up for dinner and I noticed a snake wrapped around the outboard. We agreed that it was a nonvenomous water snake that was attracted to the warmth the motor. Released and anchored, played guitar and read.

Posted by Curt at 10:03 AM No comments:
Email ThisBlogThis!Share to TwitterShare to FacebookShare to Pinterest

Drove Annie late morning to Smith Point Marina on Virginia's Northern Neck, on the south shore of the Potomac River where it opens into the Chesapeake. This accessible full-service marina has a good ramp with $10/launch and $10/ day for rig storage. I noticed after launching that my new GPS had discharged. Used the bathroom plug and recharged while sorting gear. Anchored in nearby creek off the Little Wicomico and slept well.

Up at 0600, cold morning. Long underwear and foulies, double-reefed main. Rough chop outside the breakwater with wind SW 20 with gusts to 28. Made rough but good progress NE in short 2' chop toward Smith Island, MD at approx. 59˚, taking continuous water over the bow. Attempted to turn down to closer Tangier Island, VA but set parallel to wave trough, presenting possible broach; aborted and returned to previous course. Waves increasing to 2-3' with occasional 4', with breaking tops. Nearing Smith Island we were 5˚ off the cut to Ewell village and started tacking close hauled making slow progress due to wave action. Making little progress motor-sailed as the weather worsened.

Entered cut, passed by village and anchored 1130 in the Big Thorofare for lunch. Cast off at 1215 and continued along the Little Thorofare E into Tangier Sound. Headed S running under jib alone on to Cod Harbor at the south end of the island where I met Steve Earley anchored. Rafted, had a tipple and ate our respective dinners. Turned in around 2100 with wind piking up overnight. Woke once to let out additional rode. Scanty cellular coverage.