Hope your having a great summer! 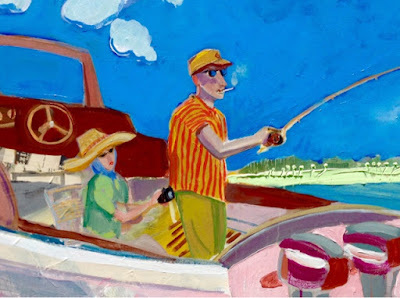 Posted by Curt at 11:52 AM No comments:
Email ThisBlogThis!Share to TwitterShare to FacebookShare to Pinterest 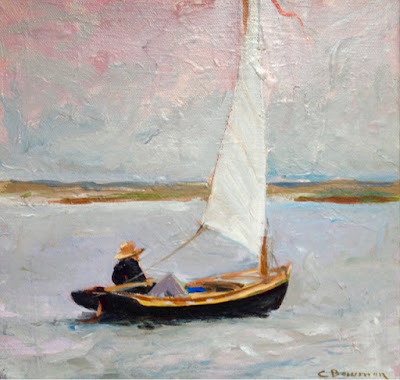 My Florida friend Lew sent this note...
You may recall an email from me letting you know that I bought your Scaffie from Walter Ross. Below is a photo from today near a little island in Perdido Bay, just west of Pensacola.

Walter painted Becky Thatcher gray, not the color I would have picked, but it is growing on me. I renamed her Marcach (Irish for Rider, my grandson's name). She still sails great, easy and fast. I have no trouble tacking, and she makes windward progress well enough for my needs.

I am delighted with her, and I thought you'd enjoy knowing that she's still kicking. 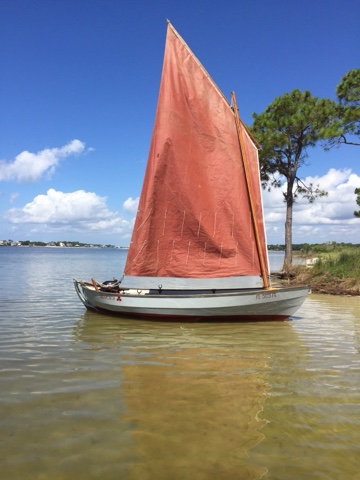 Posted by Curt at 4:03 PM No comments:
Email ThisBlogThis!Share to TwitterShare to FacebookShare to Pinterest

Annie's 'restoration' is going well although it has slowed down with the current temperature in the mid-90s F. It's hotter here than in Florida.

The first task was to get her in the back yard. Seeing that we live in an old residential neighborhood with a narrow alley brought on some head scratching. 16 feet of fencing was removed and a removable common post fashioned. I cut 4 x4 and 2x8 timbers to span the storm swale so as not to drag the trailer and started down the alley.  Then it was a crawl, negotiating many trees and many trash cans. Once by the opening it took several attempts to finesse the rig in far enough to replace the fence. It worked... mostly.

Feeling pretty good I noticed that one of the trailer tires was flat. The sidewall had exploded. I have ideas how but not at all sure. Ugh.


Many tasks yet to accomplish but still, it is mighty fine to have her near.

The Cost of Goods Used 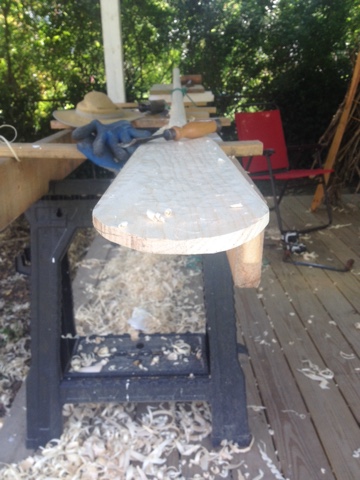 On the recent sail, specifically when docked at Bath, I fell against the sculling oar and a crack rang out. It broke in the middle and I attempted at no avail to splint it for continued use. This past week a new one was fashioned and hopefully, like the old one, will last another ten years. At least. 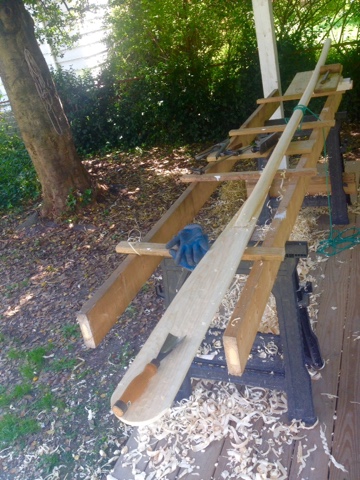 Posted by Curt at 8:24 PM No comments:
Email ThisBlogThis!Share to TwitterShare to FacebookShare to Pinterest

I've been working in the studio all day. It's hot here down South. I went in the kitchen to snoop around. This was in the 'fridge. Going to leave it at that. True story. 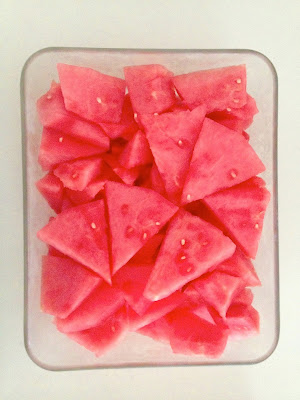 Posted by Curt at 4:39 PM No comments:
Email ThisBlogThis!Share to TwitterShare to FacebookShare to Pinterest

No one was around the boatyard at dawn. I had been a damp and sticky night that I was ready to shake off. With the mast down from the night before, trailer loading went quick. Shawn had pointed out a hose so I rinsed Annie and flushed the motor. Off to Greenville. 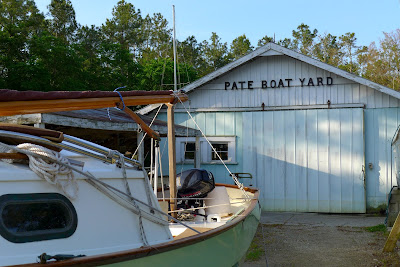 Greenville is the largest city in the area and where I went to undergraduate school. It was the college furthest away from home but still in-state. I spent the first two years partying, quit and moved to California (yeah, to find myself) and returning with a purpose to pull it together. It worked, I guess. Pulling into town I waited on a prearranged meeting at City Art Gallery. I had brought samples of my maritime paintings and got a good reception. Maybe a show on the horizon?

Finished I turned toward Richmond. Annie is 9+ years old and in need of a bit more TLC than I have mustered running back and forth to Mathews on the Bay. The decks need painting, the bilge cleaned and a new sculling oar shaped. That's a post yet to be written.

Although the mystery, of getting her in the narrow urban alley and through the fence into our backyard beside the workshop, loomed... we slowly but steadily tooled in the right lane up Interstate 95.

Arriving late I parked on the street and was happy that I had gone, that Annie had again shined and that the old guy still had it going on. Yippee!

Posted by Curt at 9:21 AM No comments:
Email ThisBlogThis!Share to TwitterShare to FacebookShare to Pinterest
Newer Posts Older Posts Home
Subscribe to: Posts (Atom)