A cold front came through in the night as I slept in Ditches Cove. I felt the tight-hauled mizzen flap a bit as it worked to keep Annie into the wind, but the protected spot let me sleep. It was cooler as I made coffee and the wind, now out of the NE bent the top of the trees above us. Set out at 0730 heading west with wind on the beam, double reefed tucked.

I saw Steve and Spartina running downwind far ahead toward Kent Narrows presumably on the way to St. Michaels. I found out later that he had not seen me. With the short chop building I set Annie north close-hauled to beat toward Love Point where we could clear to cross back over the Bay. Still behind a spit of land I was able to shoot a short video before meeting the Chesapeake's fetch.


With the Magothey River entrance as a target, I furled more of the jib and took two rolls in on the mizzen. She sails with just jib and mizzen but I prefer the driving power of all sails, albeit minimal, together. Now on a broad reach Annie shot west. The steep chop of 2-3 feet height with only a little more length, was running perfectly parallel to the course. To be less vulnerable I found myself alternating direction. Heading up to quarter the wave and turning down to quarter as the wave passed underneath. Somewhat like a surfer 'hotdogging' on a short board. Speed was up with a consistent 7 knots and more. The rig and rudder vibrated and groaned but I never felt in trouble.

Nearing the shipping channel the tide starting flowing north and the seas became confused. A wave broke over the cockpit coaming but the seas started subsiding as we made the river entrance at noon. Continuing on the Magothey I anchored in the lee of Dobbins Island to rest and eat. After a nice nap I explored the upper reaches of the river, watched dinghy racers and grabbed a crab cake at The Point restarant. Anchored up Mill Creek turning in at 2100.  25.1 miles

Mystery- when I checked the trip computer that had been reset the day before I noticed this reading. I doubt it but... 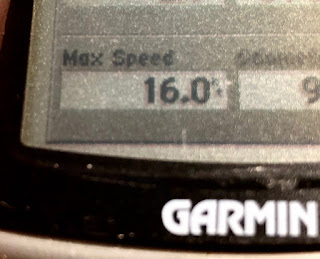 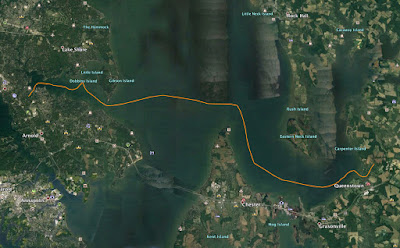 Posted by Curt at 3:39 PM No comments:
Email ThisBlogThis!Share to TwitterShare to FacebookShare to Pinterest

Left the Chestertown dock at 0700. Steve stayed behind to leave later after meeting with a friend. Steady southeast wind with many tacks down river. I was pleasantly suprised how close to the shore with full rudder we could make before each tack. 52 of them down to Queenstown. Negligible tide effect. Reached Queenstowne Creek 1830 anchoring in Ditches Cove. Quiet spot. 48.3 miles

Posted by Curt at 12:48 PM No comments:
Email ThisBlogThis!Share to TwitterShare to FacebookShare to Pinterest

Steve came over as I was finishing breakfast, we rafted up for a bit and then sailed down the creek to start working up the Chester River. Reaching on the west wind we made good time... nearly matched in speed. We made the marina in Chestertown in early afternoon. Steve planned to take a slip and I agreed to do the same. He showed me around town and we ate lunch at Play It Again Sam's and later a crab cake dinner at the dock restaurant. A quiet night spent at the marina.  17.5 miles


Posted by Curt at 9:42 PM No comments:
Email ThisBlogThis!Share to TwitterShare to FacebookShare to Pinterest

I decided for a fall cruise I would head north to Maryland's Chesapeake western shore, cross over and explore the eastern shore north of my previous trips. Having Annie in Richmond made it easy to get away early, so I left out at 5am and trailed to Shady Side. I arrived at Backyard Boats and took my time to rig and ready Annie. The trailer repairs had held well and I was satisfied with the preparations. There was even a hose to rinse the trailer after launch. 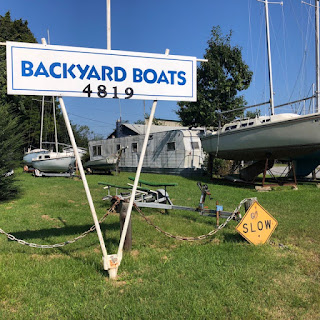 We headed out the cove around 10 am and across the bay. Wind 8-10 NE overcast. Long reach ESE around Kent Point and long tacks up the Eastern Bay to Kent Narrows. Entering the Chester River in the late afternoon my friend Steve, who had been out for a week, communicated about the possibility of a rendezvous in the East Fork of Langford Creek. I had decided to tuck in earlier but with the sky clearing and a nice ENE breeze I forged on. It was almost dark as Annie approached Steve's Spartina, buttoned up for the night. I dropped anchor down the way and turned in after a long day.  46.0 miles 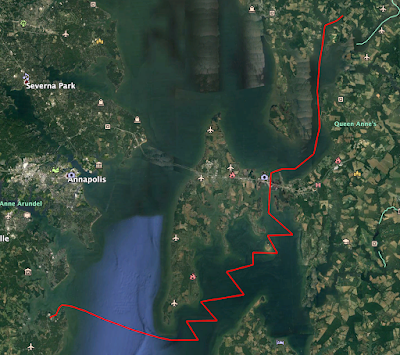 Posted by Curt at 9:30 PM No comments:
Email ThisBlogThis!Share to TwitterShare to FacebookShare to Pinterest

Morning on the Chesapeake Bay 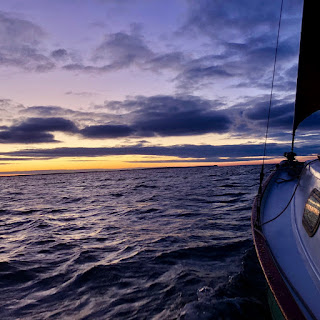 Posted by Curt at 7:20 AM No comments:
Email ThisBlogThis!Share to TwitterShare to FacebookShare to Pinterest
Newer Posts Older Posts Home
Subscribe to: Posts (Atom)