I ventured out again Wednesday morning headed for Deltaville. After contacting my friend John about the need for a bit of 'cheap' labor at the museum and finding that there was "grunt work" around, I saddled Annie and we headed north. Beautiful fall day. As the entrance to Jackson Creek drew close I fired up the outboard and within a couple minutes she conked. Clear prop... gas to the carburetor... no problems. Going through the mental list I opted to change the plug having a fresh one in the tool box. First pull and on the way. The old plug looked just fine. Got me. As Roland Anderson said later that afternoon... "the old guys just say: It's a bad plug. I guess that's enough said.

The new boat shop extension was looking mighty sporty with interior walls and electric. John was fitting pieces on another deadrise and I started by sprucing up the benches and fastening a couple large bench clamps (wood vises).

Put in the better part of Wednesday and Thursday in the shop. Slept on the dock in Mill Creek. It reminded me of when I would commute to work at Calvert Marine Museum in Solomons, Maryland in the early '90s. That was another Mill Creek and another boat... my Drascombe Lugger Maggie Mae. I would get up early and sail or motor several miles and tie up next to the bugeye Wm. B. Tennyson.

Back to the engine. Annie's 6hp Nissan Marine is a fine friend. I've had all makes from British Seagull to Honda and this one gets high praise. Like small Mercs and I believe small Evinrudes, Nissan is basically a Tohatsu by another name. Some may not have that at the top of the list but it has been for 12 years a faithful friend. I maintain and winterize and she still fires up on the 1st or 2nd pull and runs smooth when needed. That works for me. 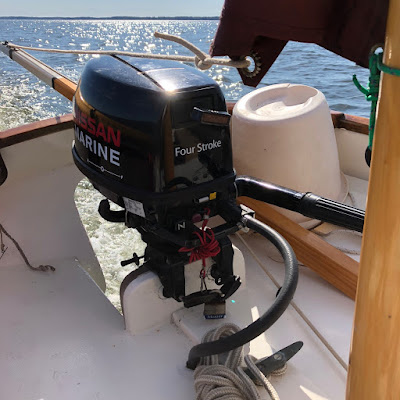 My time on the water has dwindled. That has been my doing... staying busy in projects and traveling here and there. It is all good but there is nothing quite like losing myself on Annie. Actually I have gotten a bit grumpy lately and it doesn't take much to figure out why.

Monday night I checked the calendar and the weather and it was open and perfect. Clear, cool days and still cold (I know that is relative...). Heading down to Mathews County Tuesday morning I went by Morninstar Marina where Annie stays, hitched up and put in at Town Point below the town of Mathews on the East River. Tacked down river and spent the rest of the afternoon on the open waters of Mobjack Bay, lost in that open feeling.

As the sun fell low in the sky we started reaching back northwest toward the mouth of the North River. It was further than I thought and had not made it very far upriver when night fell. I picked a spot off the western shore and anchored about a hundred yards out. It was peaceful enough but as I later fell off to sleep a very short rhythmic chop picked up from the south. The tightly-hauled mizzen held her pointing to the west while the waves lapped at the beam. A shuttery rocking through the night took a while to get used to. Too much time on land. 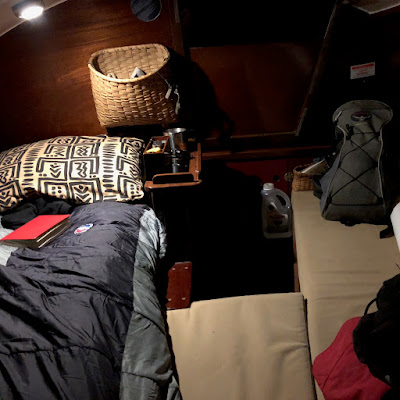 Breakfast was light. Ellie had thrown in some of her 'vegan surprises' so I left the freeze dries in their locker for another day. I weighed anchor and headed south back to the bay. The sky cleared and we spent the morning reaching through the SSW breeze. It had dipped to the mid 40s overnight (sleeping bag over sleeping bag) but the day rose to mid 50s with 15 kt with manageable gusts. Perfect.

By lunch I had been into the Ware River and back across to Pepper Creek for a late lunch on the eastern end of the Mobjack. Continued back up the East River passing Williams Wharf where a movie was being shot. Schooner Alliance was prop with many actors on the dock that had been camo-ed with period sets. Up river we passed by the boat ramp and found a quiet anchorage upstream . Quieter sleep, upper 40s.

Hauled out in the morning and returned to Richmond refreshed. I really doesn't take much. 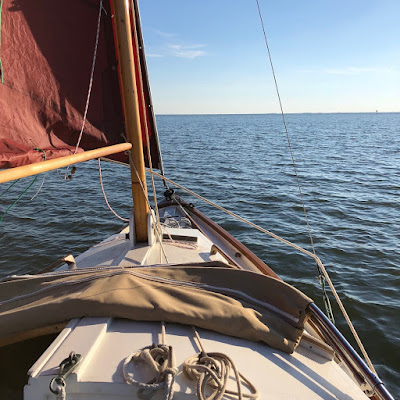