An up and down night. First nights are like that... needing to find the new 'early to sleep' rhythm of being alone on the water. Steve was meeting me at 9:30 so I resorted gear and savored my coffee. As time grew near we headed toward the marina, and as Annie came alongside Steve appeared with gear bag and soft lunch cooler. And then we were off down the North River toward the Mobjack with a north wind shoving us south.


The wind held through the morning as we plowed through the short chop. Steve took the helm and I kicked back in the cockpit. Turning up the Ware River we found a small cove in the lee. Dropping anchor we enjoyed the lunch Steve brought... fancy cheeses, salami, apples and French wine! Not the typical fare aboard, but no complaints. 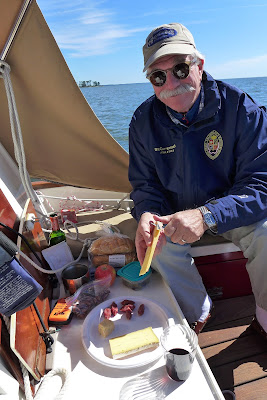 We started up the Ware River but decided that we would return to the marina planning to get back before five. Tacking and motorsailing got us back and I again retraced our track to anchor overnight at the 'lunch spot'. 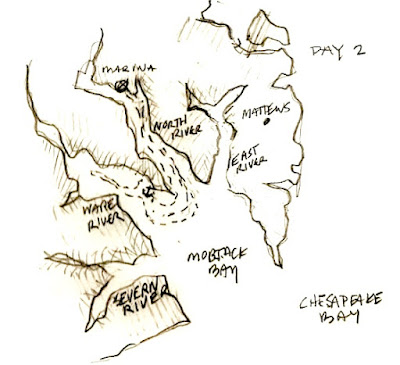