A couple of nights ago I spoke to a meeting of the Traditional Small Craft Association chapter at the St. Augustine Lighthouse Museum. TSCA is a national group of enthusiast that share information, boatbuilding efforts and have meets in the form of festivals and 'mess abouts'. My talk centered on my experiences cruising in small boats with the help of a video projector and lots of 'slides'.

The St. Augustine chapter is part of LAMP Boatworks associated with the Lighthouse Archaeology and Maritime Program. The group has completed several small craft and others are in progress including a ship's boat for the Galveztown, a Revolutionary War ship being built in Spain.

Up early, last of the eggs. Weighed anchor and motored against the wind until the channel turned west enough to motor-sail with the jib and mizzen. Returned to the ramp at Bokeelia, hauled out and spent the next 5 hours heading back to St. Augustine. Stopped at Pollo Tropical Caribbean chain restaurant and filled up on the way with  enough for to-go bags. Although the fishing left it bit to be desired, it was good time. Tropical Florida in the late fall....

Granola bars, bananas and coffee for breakfast. Set out south down the east side of Pine Island. A very easy run downwind using the whisker and bamboo poles to wing out the jib and main with a make-shift preventer settling the head sail. We picked up the markers rimming the north end of the island and slipped into what we would learn is called the Miserable Mile. Green and red markers zigged and zagged as we followed the narrow cut toward the village of Matlacha (mat-la SHAY). Arriving we tied up to a work dock by the bridge we came across days before on our way to Bokeelia. Inquired about a lunch place and ended up moving through the nearby canal and tying up at Old Fish House Marina. Terry had an oyster sandwich and I, a mullet wrap.

We walked along the small, funky shops and grabbed an ice cream before heading back north. Crossed over to the east side of the cut into the flats and fished with new 'shrimp lures" we picked up at a bait shop. Had a few bites but guess what... no luck. We continued north anchoring by a hammock and got hit hard by mosquitoes. Re-anchoring nearer the channel we finished dinner in a breeze and turned in early.

Up at daybreak and started fishing the mangrove line. Caught some small 'throw backs" and Terry cooked up scrambled eggs with onions and brie. We made our way over to the state park docks and went in the ranger's office to check out their chart and get some local knowledge.

About 0900 we decided to head north up Charlotte Harbor. The wind was NNE at 15-18 knts with gusts. The chop was on the nose 1-3 ft. at 2 second interval. So we held on and made long tacks under double-reefed main, full head and mizzen. Packed the scuppers with sponges on the inside to minimize water coming onboard and made Burnt Store Marina below Punta Gorda around 1600.

We tied up to the gas dock and trudged into the 'all you can eat pizza and pasta night' restaurant. That was an unexpected treat. We had learned earlier that an overnight tie-up was $49 minimum (!) so we grabbed a shower (the door was open) and motored out to the leeside of a hammock near the entrance. Its trees were covered with hundreds of nesting birds... we anchored off and tried to keep quiet not to disturb them. 22.4 earned miles.
Posted by Curt at 10:27 PM No comments: 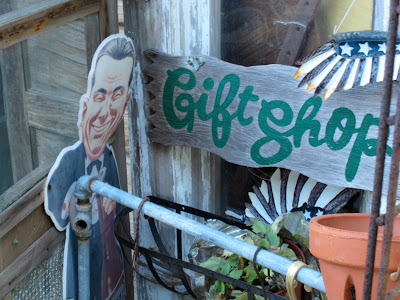 We returned yesterday afternoon from a 4 day trip to southwest Florida. Good sailing for sure...

Day 1
Terry and I left St. Augustine Saturday morning after picking up Annie at the shop where we had loaded her. We headed down I95 and then I4 through Orlando. I decided to take a slightly longer route south to Sebring. Our firm had designed and built an exhibit on the Civilian Conservation Corps in Florida at Highlands Hammock State Park and I thought Terry would like to see it. The CCC was a national work project that built the original Florida State Parks during the Depression. As we arrived we found that the park was having their annual CCC Festival. We walked around, saw the exhibit and spoke to the assistant manager I had worked closely with 9 years ago. Sometimes going back to a place in your past isn't the best idea. This was good. 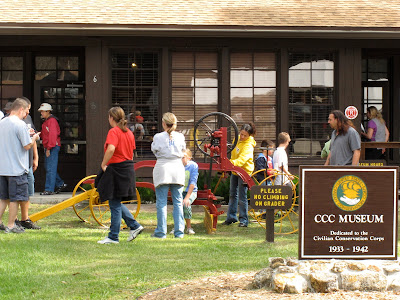 We continued to Cape Coral, crossed the bridges to Pine Island and made our way to Bokeelia on the north shore. Lavender Landing boat ramp charged $10 a day to launch and park. As we were rigging Terry noticed that the boomkin was left behind. It is a spar that support the turning block for the mizzen sheet. The boat hook took its place, tying a loop of line to act as a block.

We motored out the canals and passed through Shell Cut into the sound. It was around 1630 and the wind was a solid 15 with gusts to 25 out of the NNE. I had tied in a double reef in the main to stay on the safe side.

As we made our way around west up and around the shoal markers the sun started setting. Terry held course as I prepared the running lights. He had been getting some oversized waves and when I returned to the cockpit from the foredeck a gust hit just as a large wave lifted us up. The rail dipped and water rolled in to the cockpit. She righted quickly and I started pumping. All was well in a couple minutes as night set in.

Around 1930 Annie rounded the markers at the north end of Cayo Costa and hugged the downwind side of the opening to Pelican Bay where several anchor lights shown beyond. After clearing we anchored in a cove protected by thick mangroves and tore into a pre-cooked rotisserie chicken. We set up the cockpit tent (Terry's 'cabin') and I went below for the night. The exploration had started.

Terry and I are leaving for Cayo Costa this Saturday. We moved the departure up to coincide with favorable weather. Today I took Annie to the shop and we started going through gear and making a grocery list. Tomorrow we will finish alterations and Friday load up for road.

An aside... I played music at an environmental meeting down south along the Matanzas River this afternoon. Lots of salty oysters and fish stew! 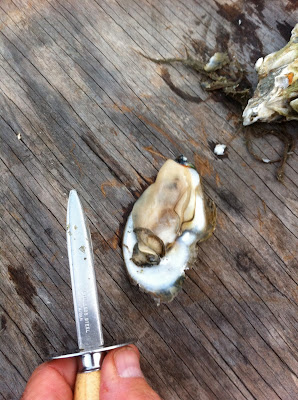 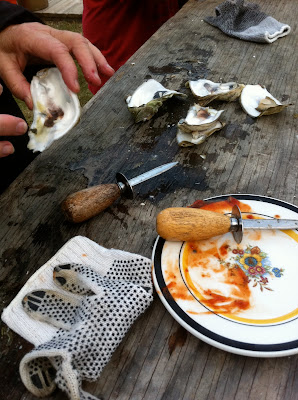