It was a blustery first sail of the spring. After a lengthy but enjoyable re-storing of gear I launched Annie at the Gwynn's Island ramp and motored through the bridge into the Piankatank River. Setting sail I tacked west passing Stove Point Neck into Fishing Bay, busy with sailboats of all descriptions. There was a pod of Optimist dinghys being maneuvered through buoys by kids displaying new skills.

It became apparent that the northwest wind was getting fresher. I furled the headsail, tightened the mizzen and dropped the main yard while hauling in the reefing line that gathers the luff. Then the leech line was pulled and wrapped tightly around the excess sail aft of the new double reef clew. I tied a couple reef point in the reduced main, unfurled the head sail and was underway without leaving the cockpit. 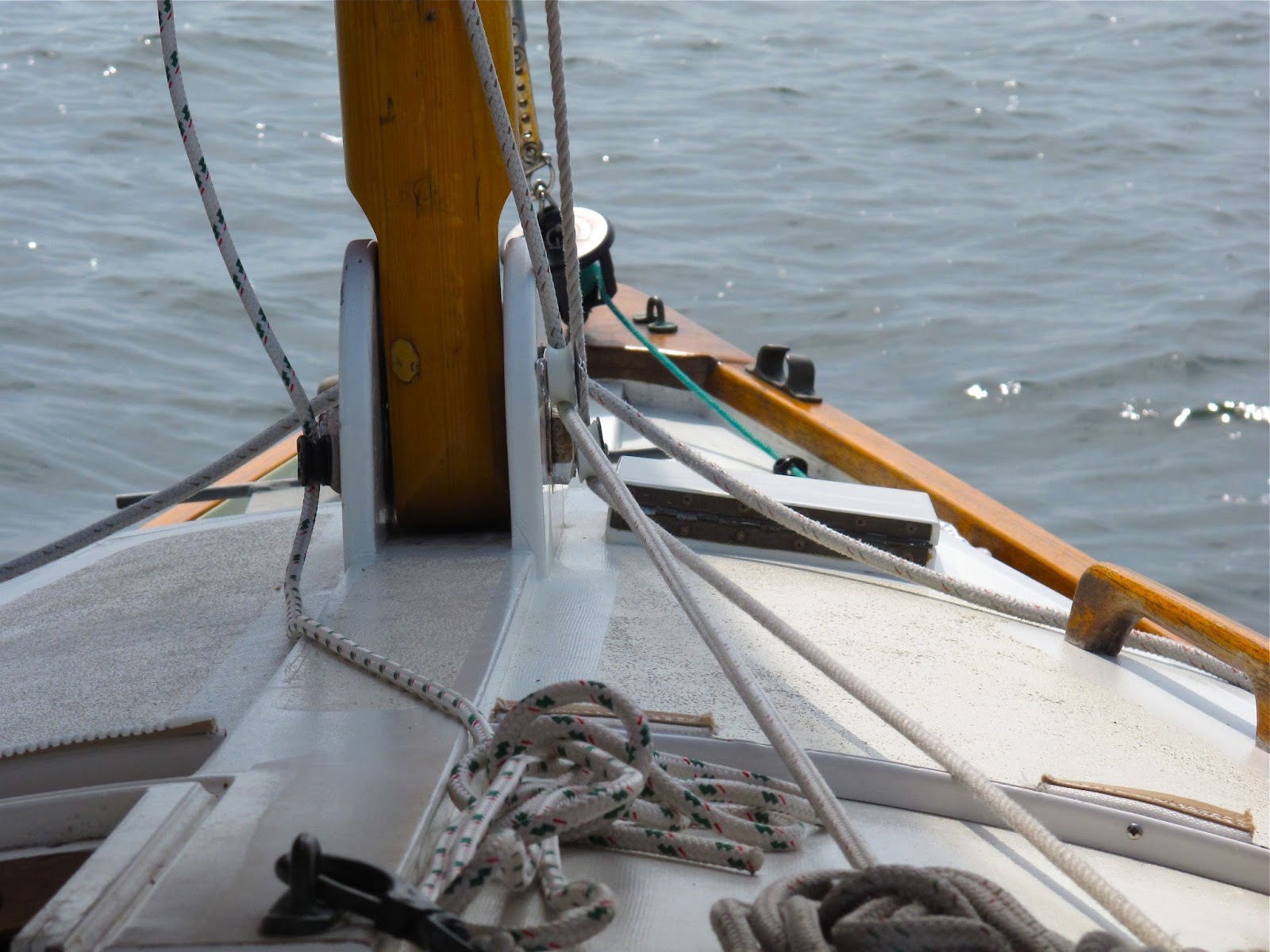 She settled down and started an all-day series of short and long tacks as we worked up the river. Wind often seems to follow the a river changing directions at each bend. Around midday gusts became more prevalent and then it happened. A strong gust hit and Annie headed back up to level up, a wave smacked the beam and water shot aboard and got my camera. I popped out the battery, toweled it down and put away. It still drying out... I am hopeful.

The wind freshened more and I reefed in half the headsail, slacked the main a bit and tacked on. I reached my destination at Freeport Marina around 1700 after 7 hours. I was chilled but happy about the day's run. 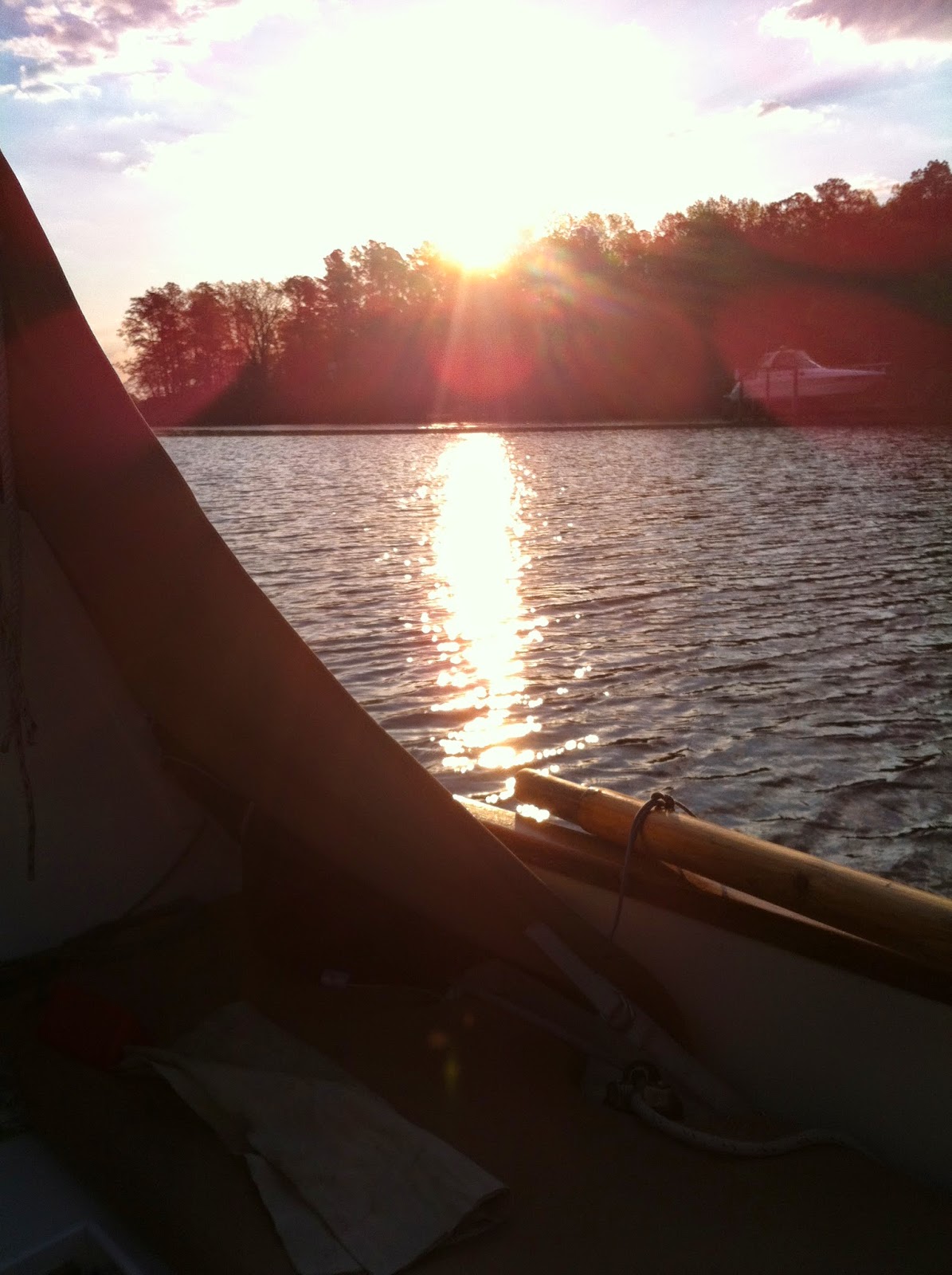 I anchored up near the head marsh of Harper Creek, cooked dinner and turned in early. Slept well in the cool. 'Fortified' oatmeal and tea for breakfast and little chores kept me busy until I returned to Freeport where my friend Rob joined me to sail back. The day was sunny and cool but the wind had gone to the southwest and we found ourselves tacking into it all the way back! 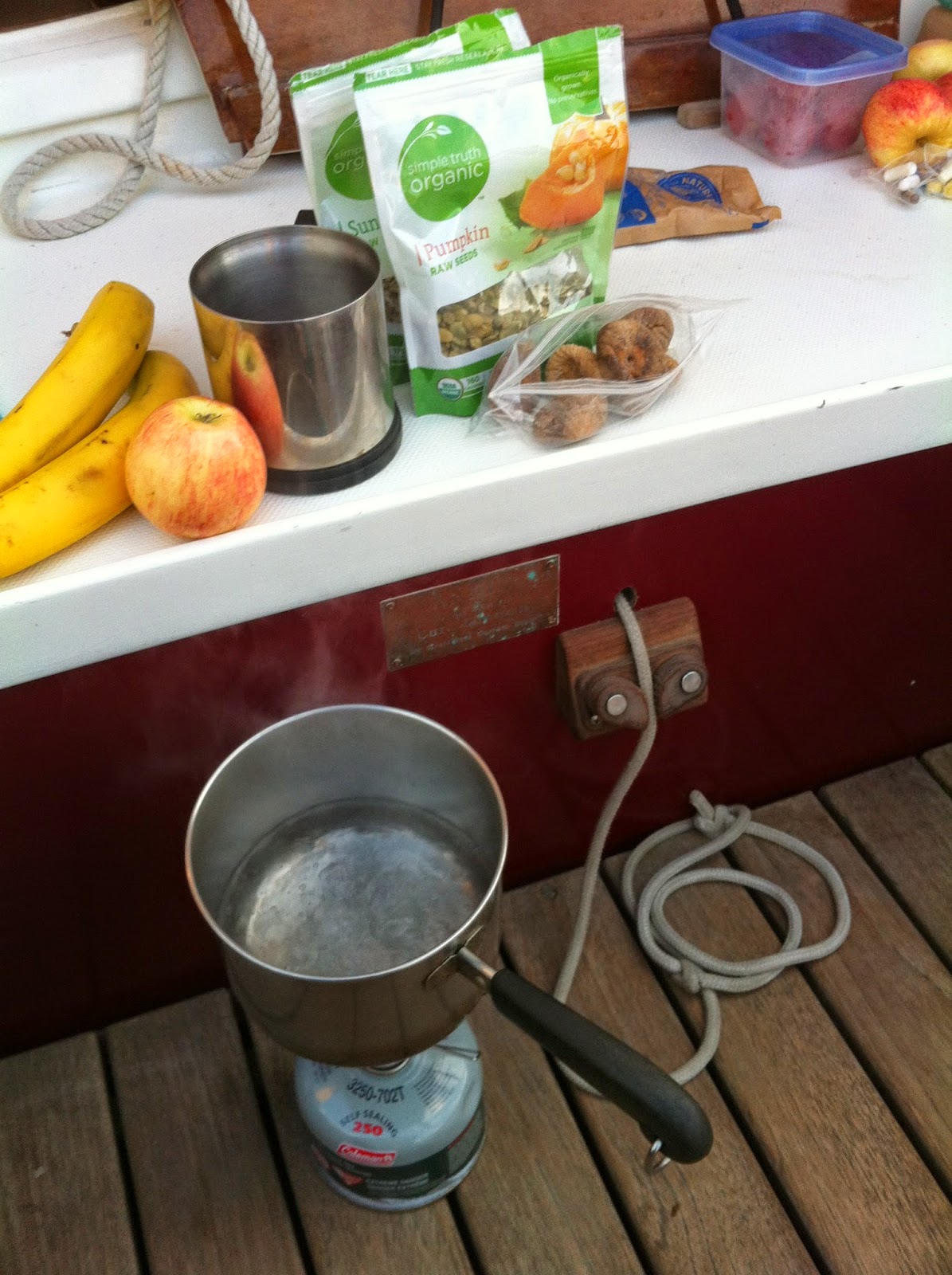 Rob, new to sailing, took to it quickly and we had a great time plodding downriver. He had brought food from grilling the night before. All in all it was a lot of fun having him aboard. We arrived back about 1700, trailered up, washed down, re-covered and left out to get Rob's car on the way back. First sail... and ready for more. Approximately 42 miles, average 3.4 knots.

Today I read more in the Log of Spartina about my friend Steve's new friendship with Webb Chiles. If you sail a small boat or maybe any boat for that matter you have probably read about the adventures of Webb Chiles and his Drascombe Lugger. If not, crank up your Google... its some of the best.

I was lucky to find a Lugger back in the early 1990s in Southern Maryland. I was working as a curator at the Calvert Marine Museum and among other things she became my 'research vessel' and commuter craft. We lived out near the end of Drum Point and to get to work I would drive inland and turn back southeast to Solomons Island. It was much closer by water, so many days I would get out early and sail/motor along the creeks and tie up at work beside the bugeye Wm. B. Tennison under the old Drum Point Lighthouse. In the late afternoon 'we' would return as the sun set.

Maggie Mae belongs to a friend there now and I am sure she still cuts the water along the Maryland Chesapeake.

Is Your Centerboard Banging?

While hauled out last week I checked the centerboard and rudder wells and especially the slots where they come through the hull. The centerboard (or better centerplate) had slapped side to side at anchor and in mixed seas when Annie was first built. Several years ago with the help of my friend Jay in St. Augustine, we attached heavy plastic (1/4" thick) with stainless screws either side of the slot to close in on the plate and effectively narrow the opening. The slapping ceased and on recent inspection, they appear to be in good condition. The stainless centerplate always hangs a couple inches proud of the hull so it hasn't caught above the plastic and failed to drop. Something to consider?

Spring is here and so are the tasks I deferred for one reason or another. Annie's trailer has taken a rust beating in the continuous saltwater dipping over the past seven years. So I got the folks at Morningstar to lift her off with straps hanging from the forks of their lift. It worked well, having made sure to position the straps under bulkheads. 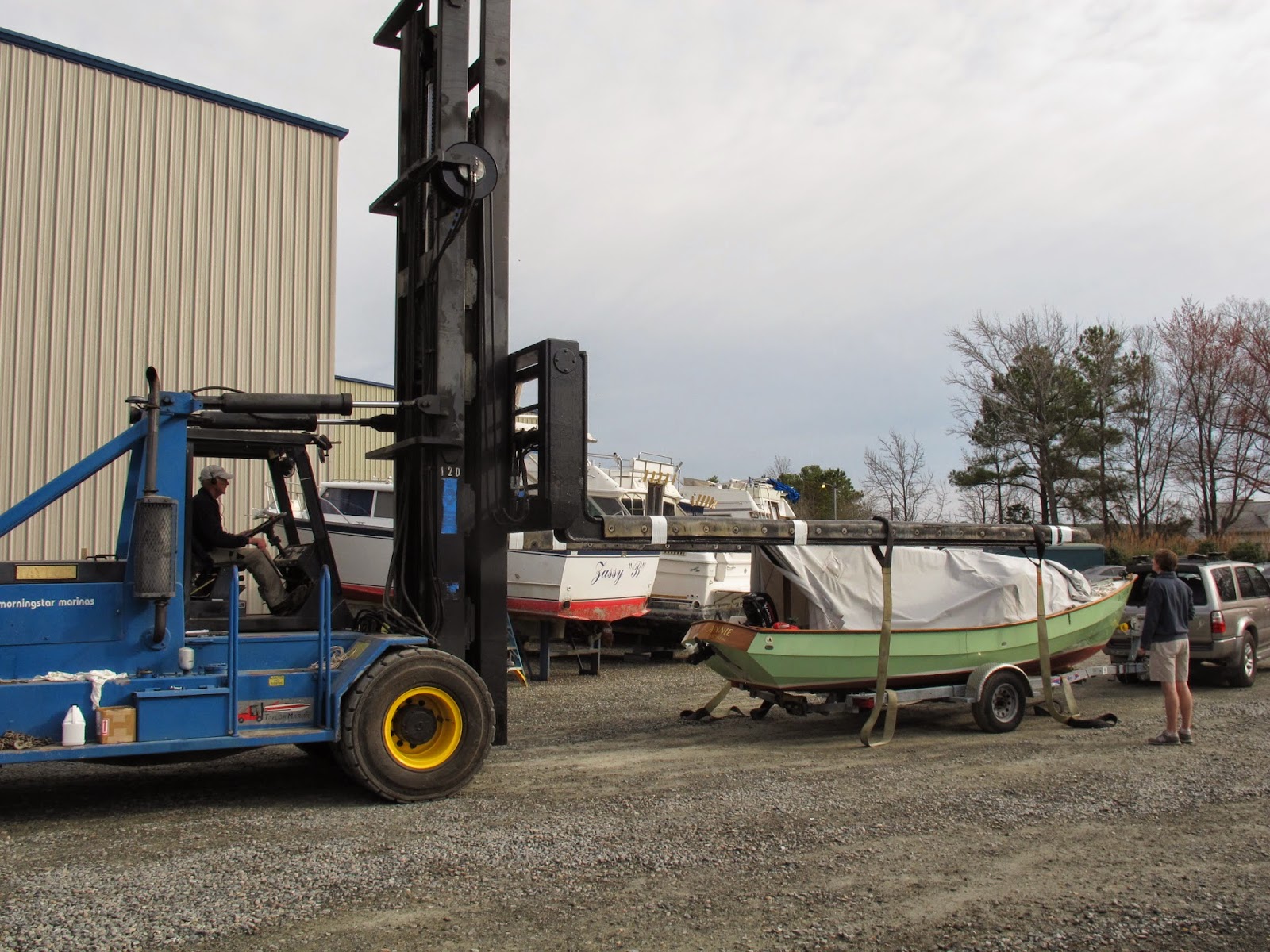 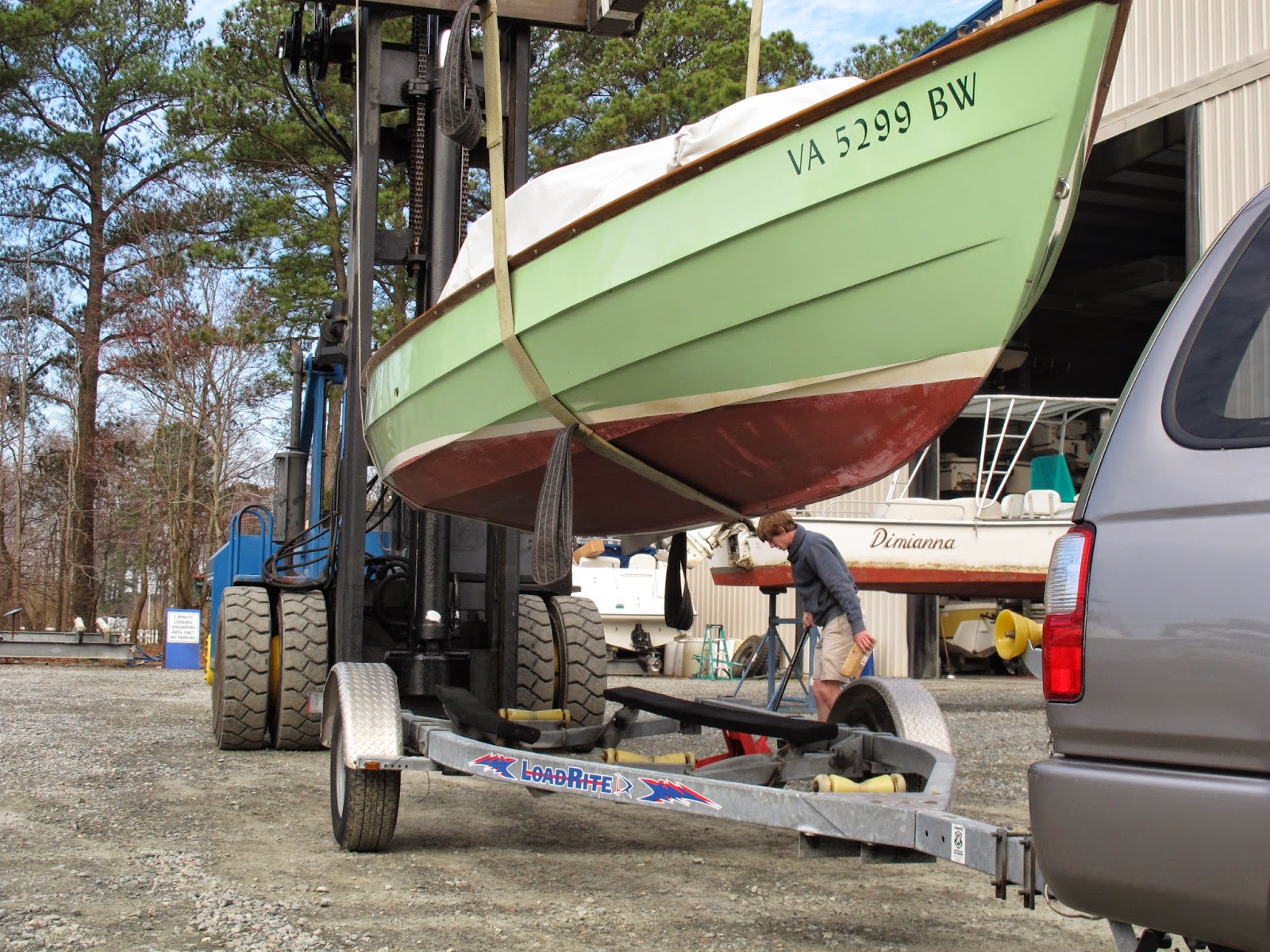 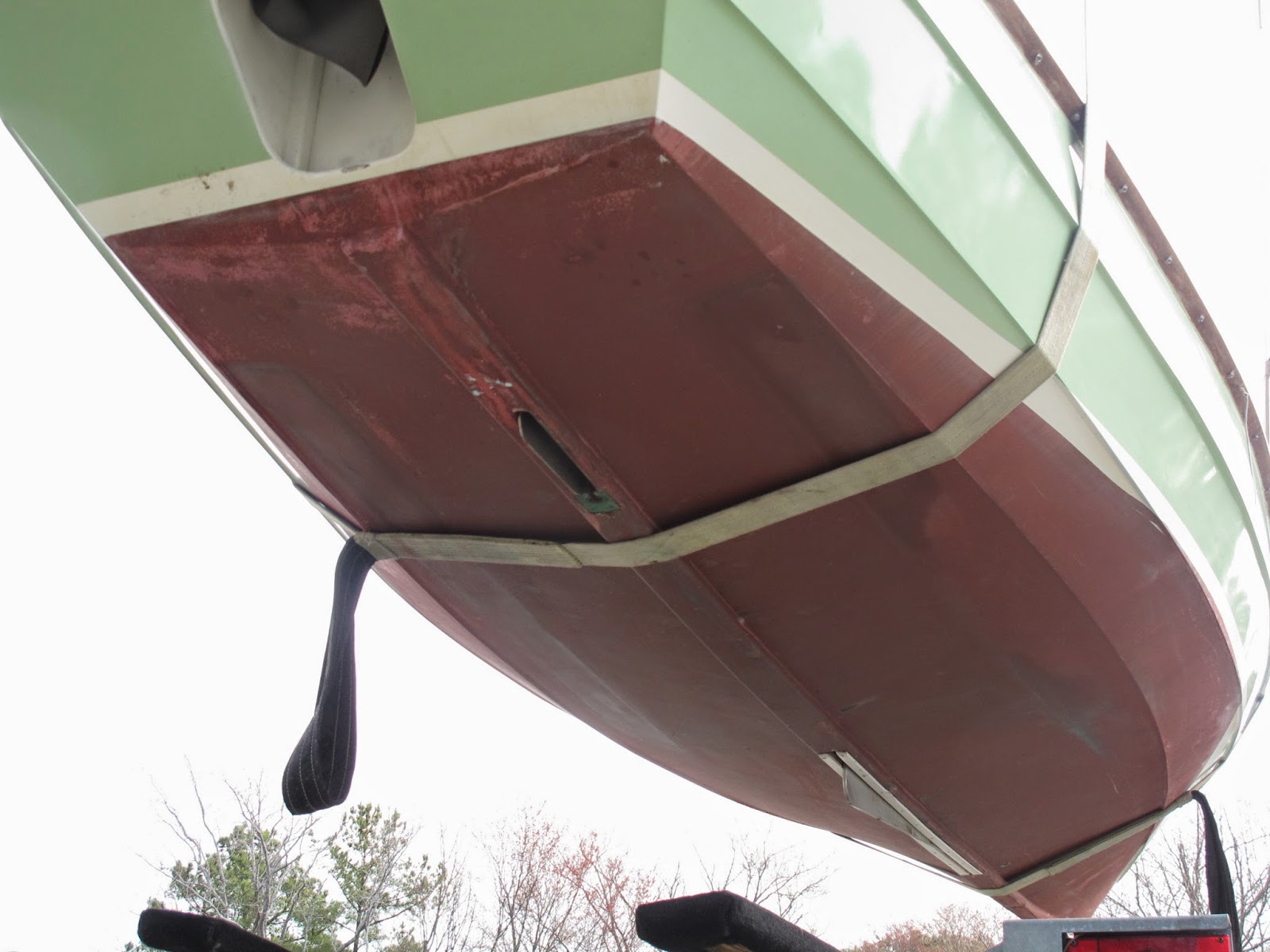 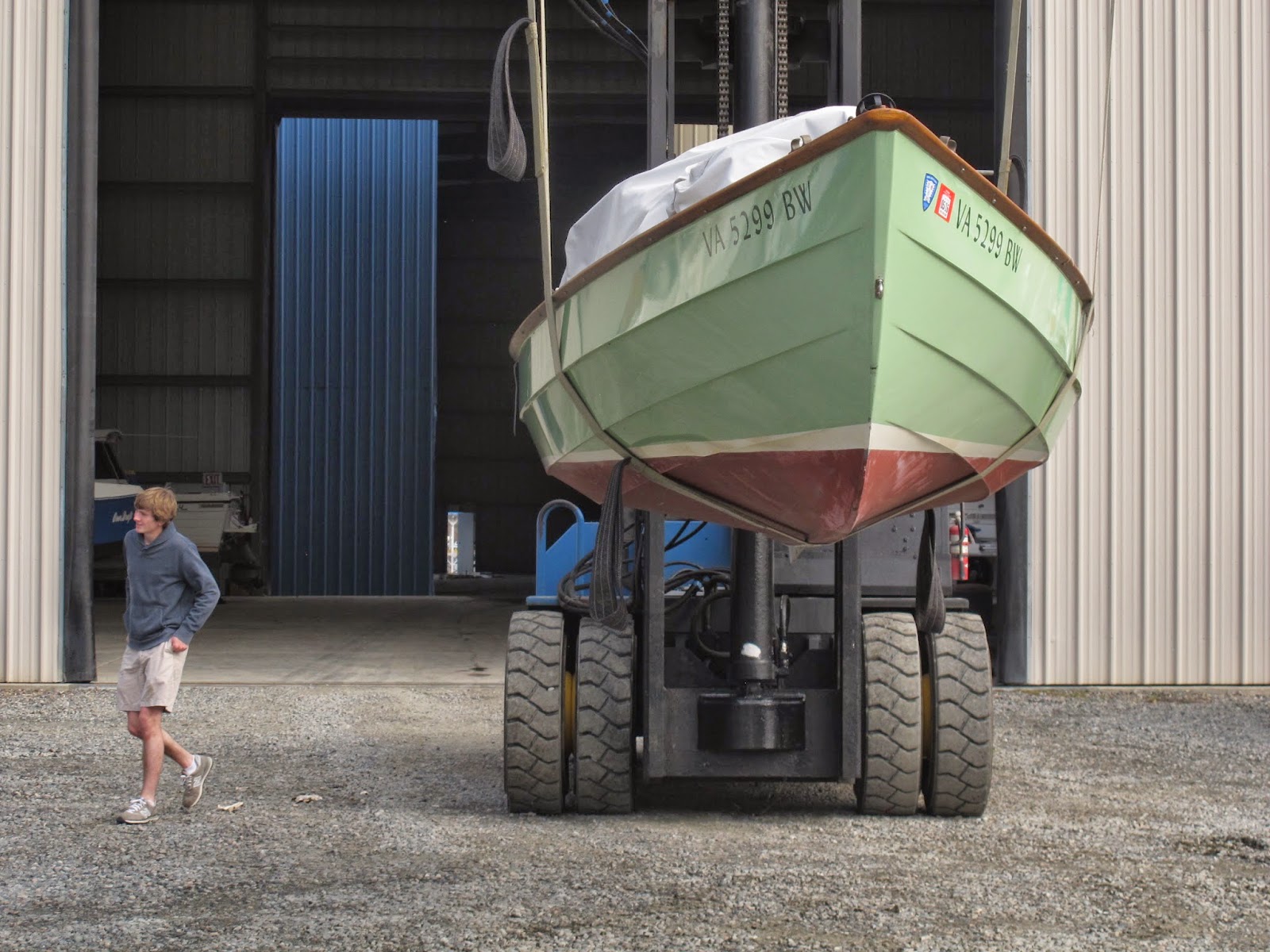 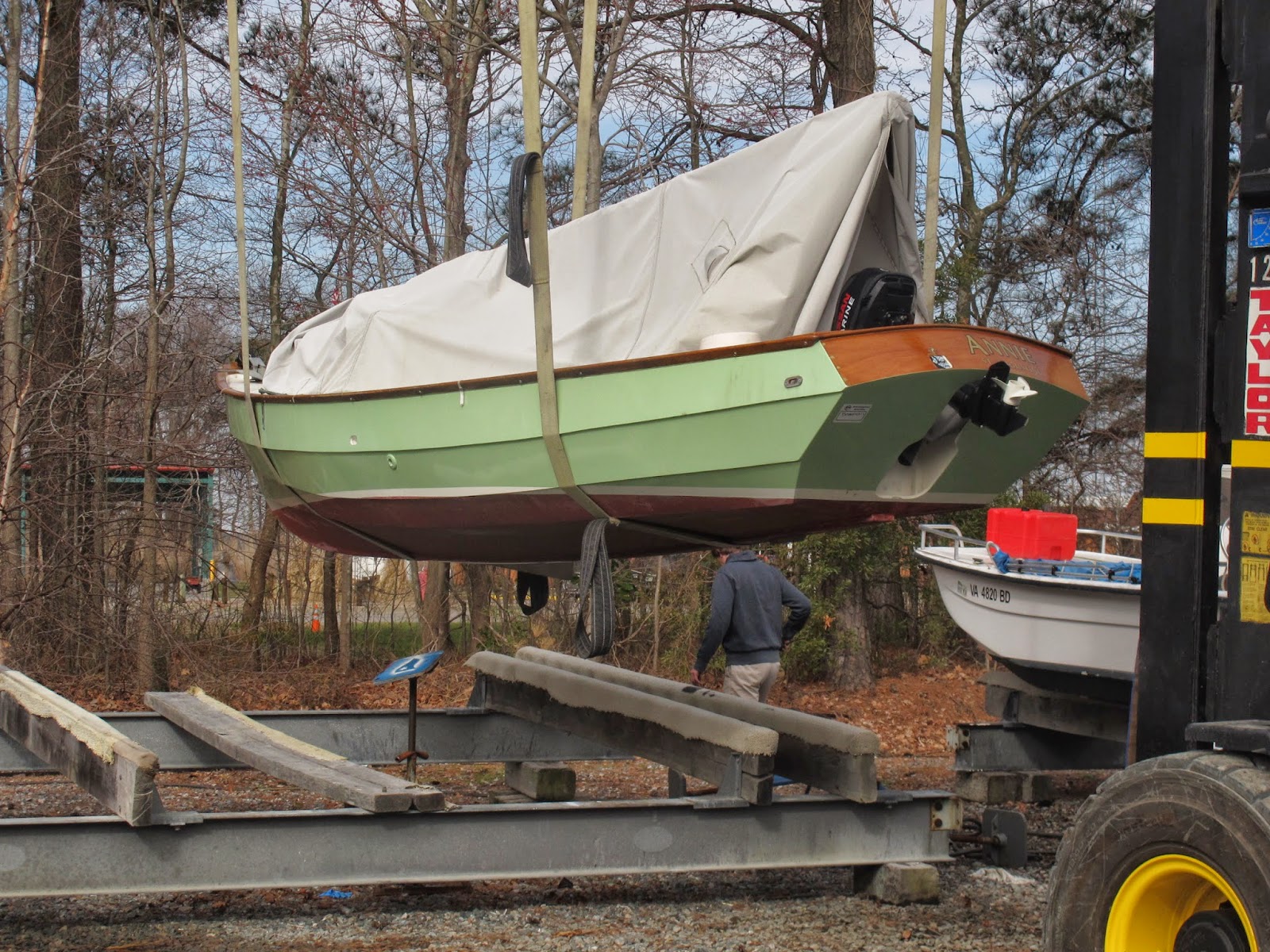 The bolts had been sprayed with WD40 on my last visit.  I began cranking off them where possible with a long braker bar. Some needed grinding and all sorts of coaxing. Most were 1/2" bolts that took a lot out of the ole boy. The safety cables were shot so they got replaced too and in the end, after a lot of wire brushing and a coating of lithium grease, I felt pretty good about the condition. 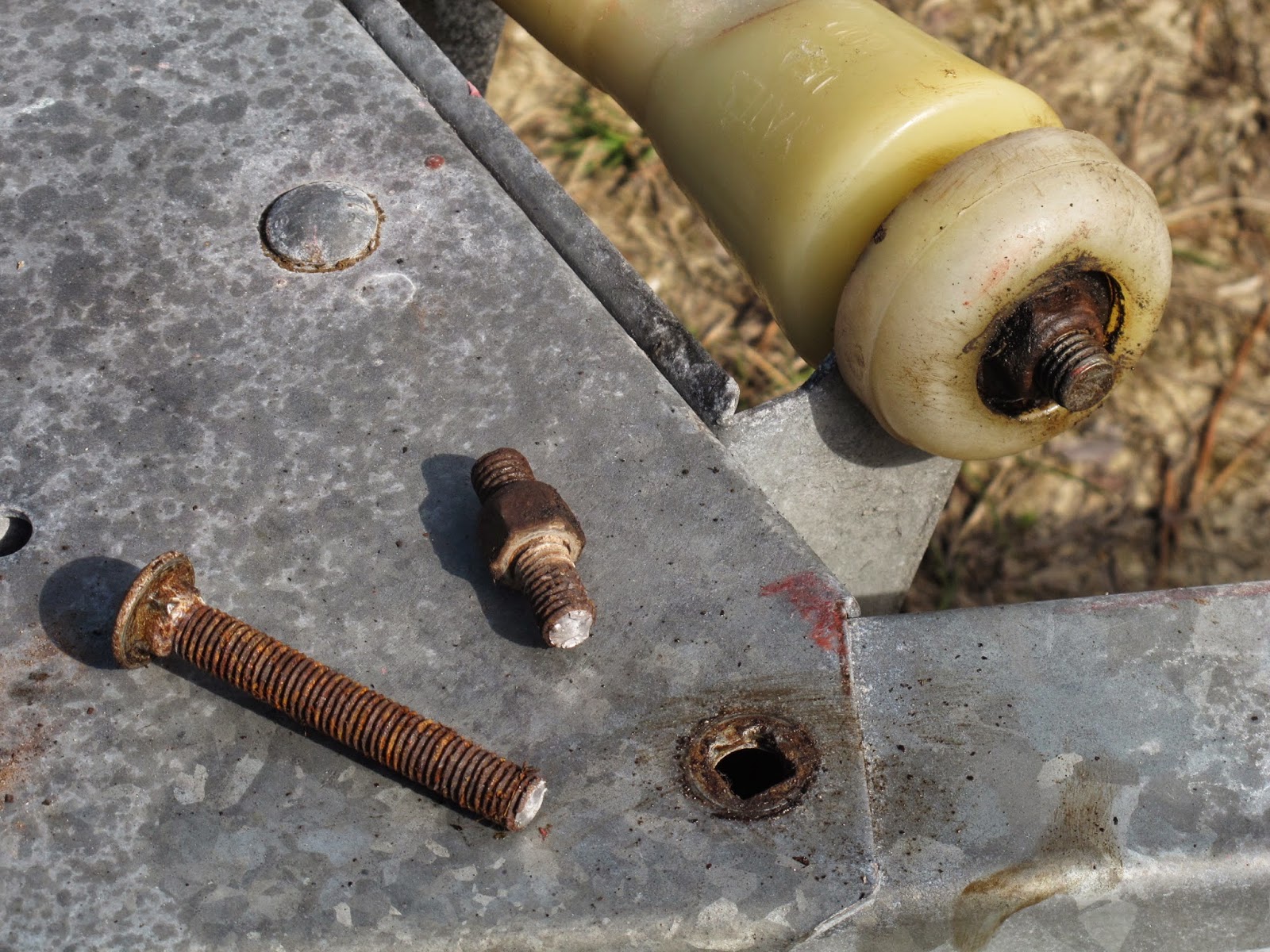 Annie looked exceptionally good after a long winter. There is nothing quite like a well fitting cover. The rails got a touch up of Cetol and I decided it was a good time to paint the bottom. The hardware in Mathews had a quart of generic, red, ablative bottom paint that went on easy. 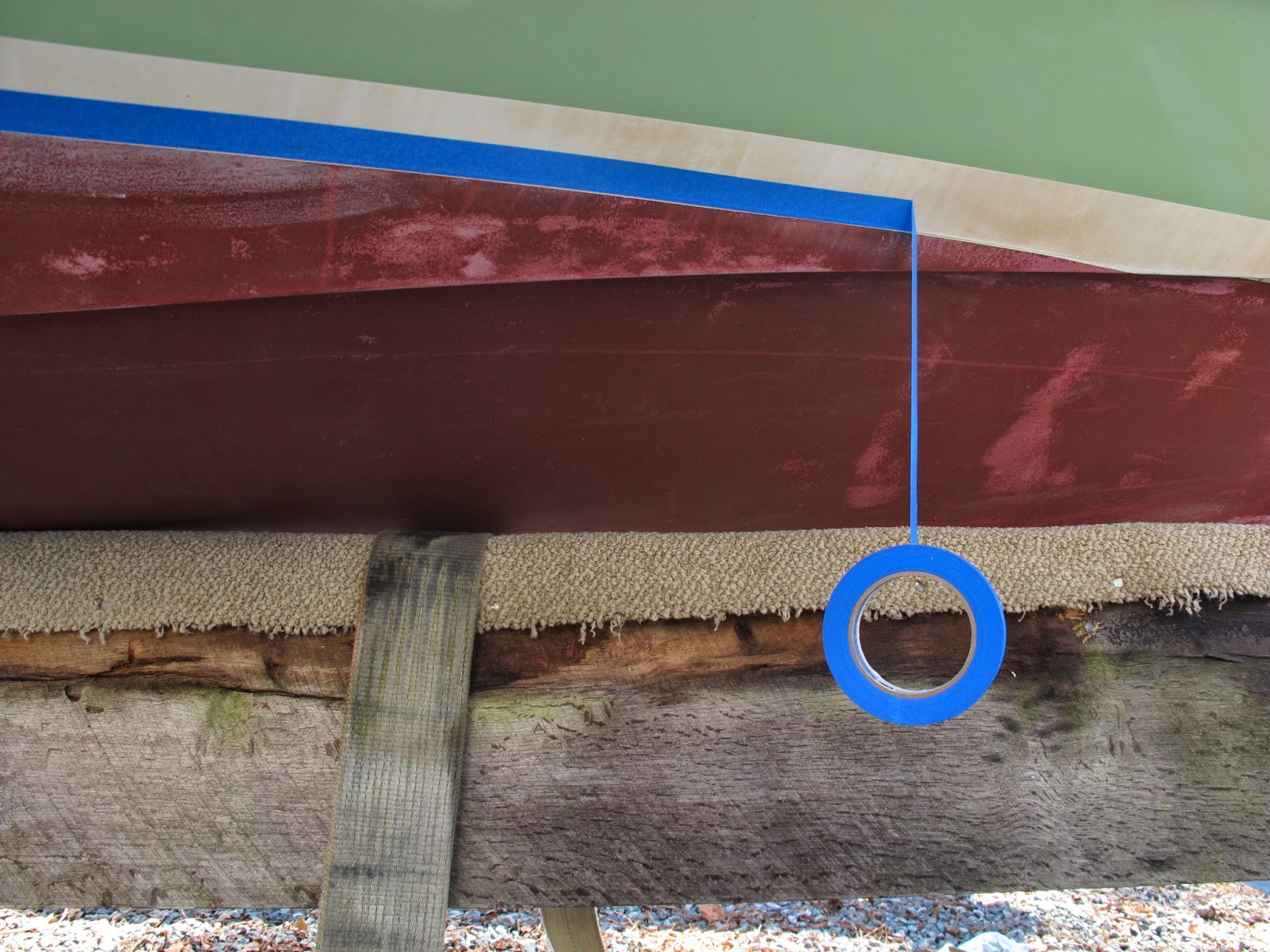 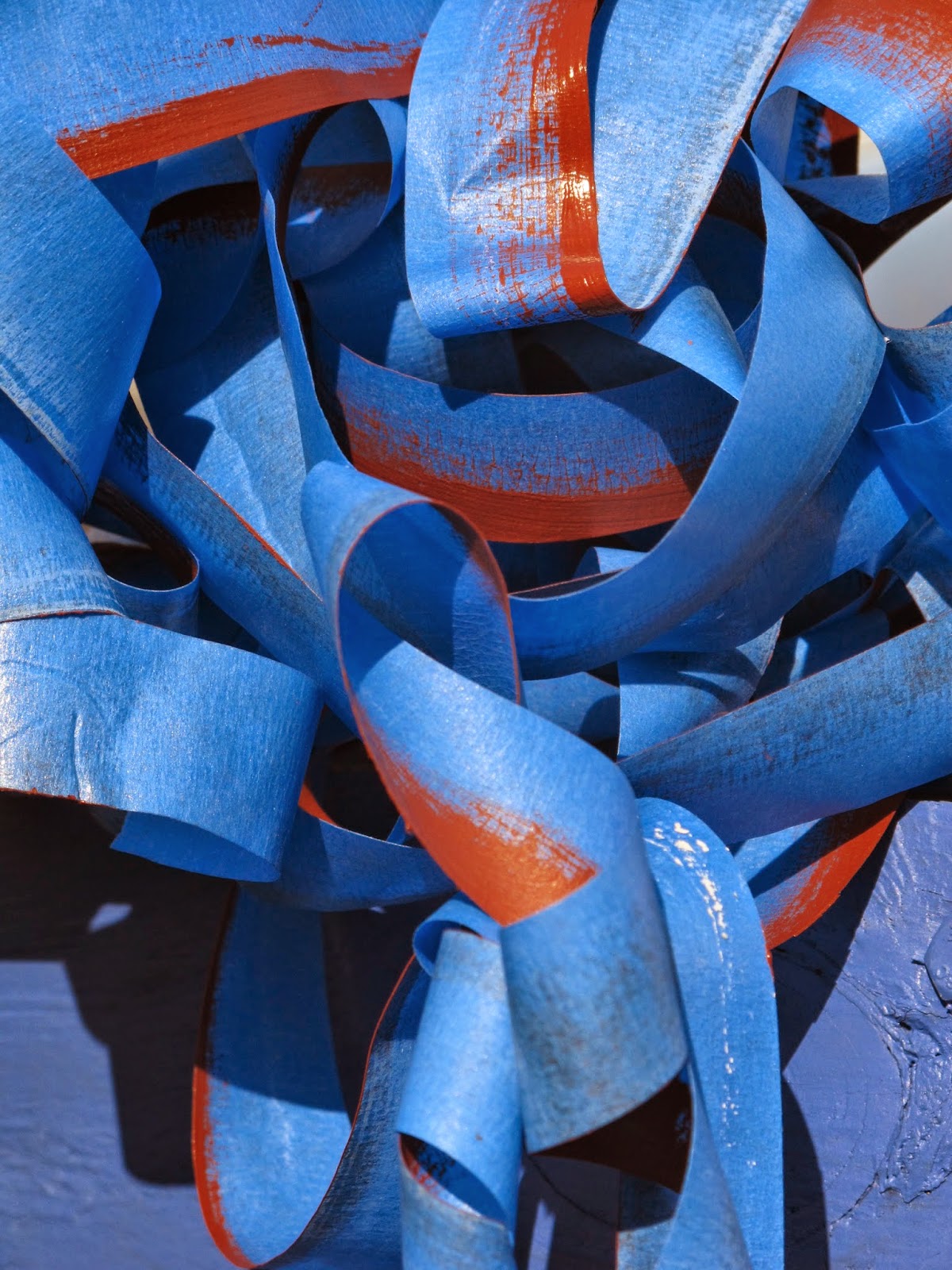 It reminded me of 30 years ago when I cleaned and painted yacht bottoms when I was living aboard Quelle. I did remember to wear gloves and cover up. Probably have ample copper coursing through my veins.


Stayed aboard and awoke early, had a great shower and arrived at Linda's Diner when they opened at 6:30. The regulars had the bar almost full and were giving the young morning cook a well meaning 'hard time'. Big cholesterol-laced breakfast with black coffee.


I finished up and Annie was resettled on her trailer about 10:30. A quick motor flush - second pull!- and off to Deltaville to check on the museum. The deadrise 1/2 scale model was close to finish and is looks great. Capt. Crunch and his team have really been working. 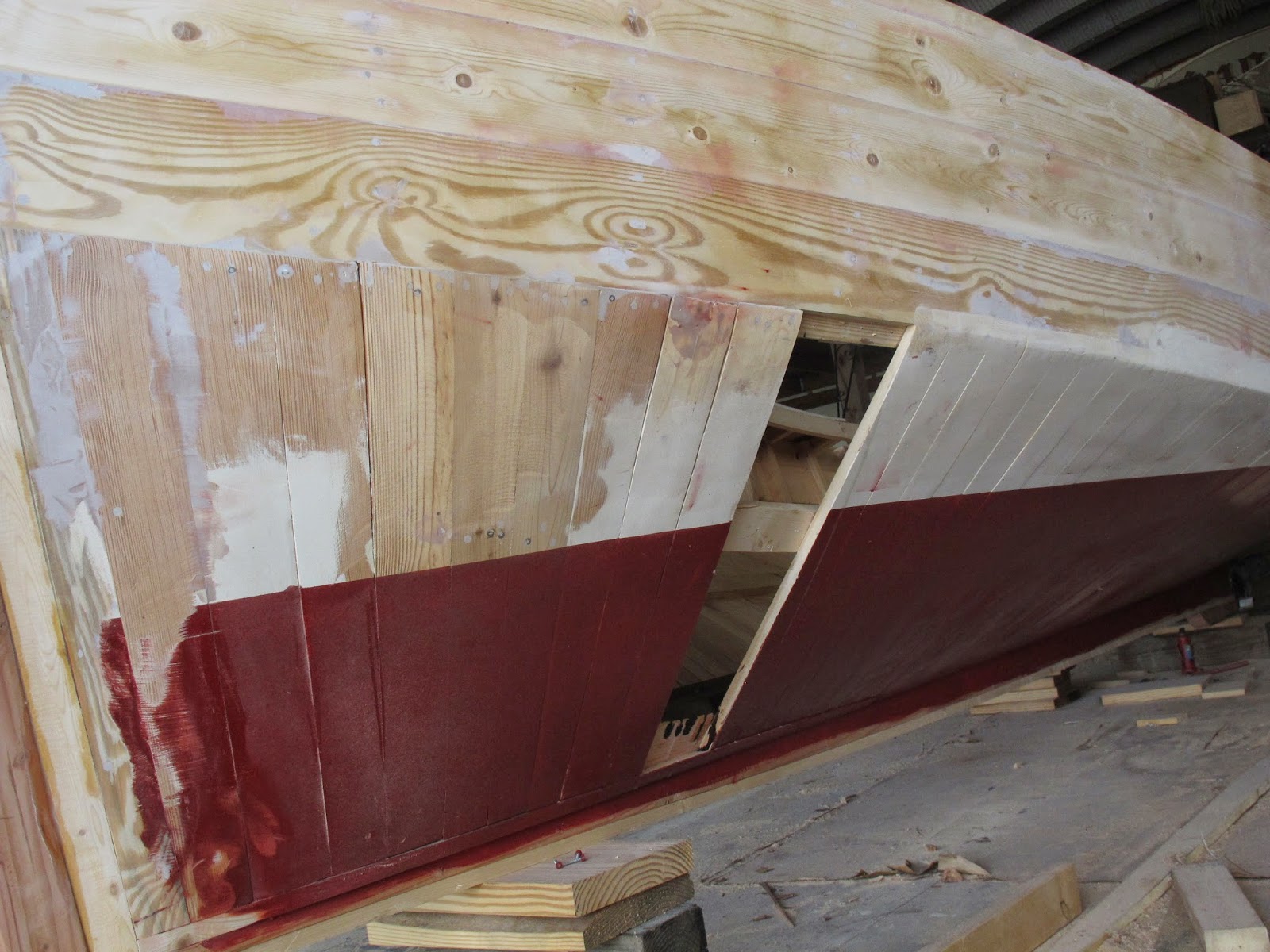 Looking forward to returning soon for a day in the water... aboard Annie with her smooth belly gliding through the waters of the Chesapeake Bay.