With a scheduled meeting at the Deltaville Maritime Museum I decided to get out on the Rappahannock. When I arrived yesterday morning is was cool and there was 8-10 knots of wind. Using the boat ramp at the Urbanna Town Dock it was easy to quickly move into the river. Sailing east northeast on a reach, we meandered into Corrotoman Bay and after a few hours turned back to make the meeting. 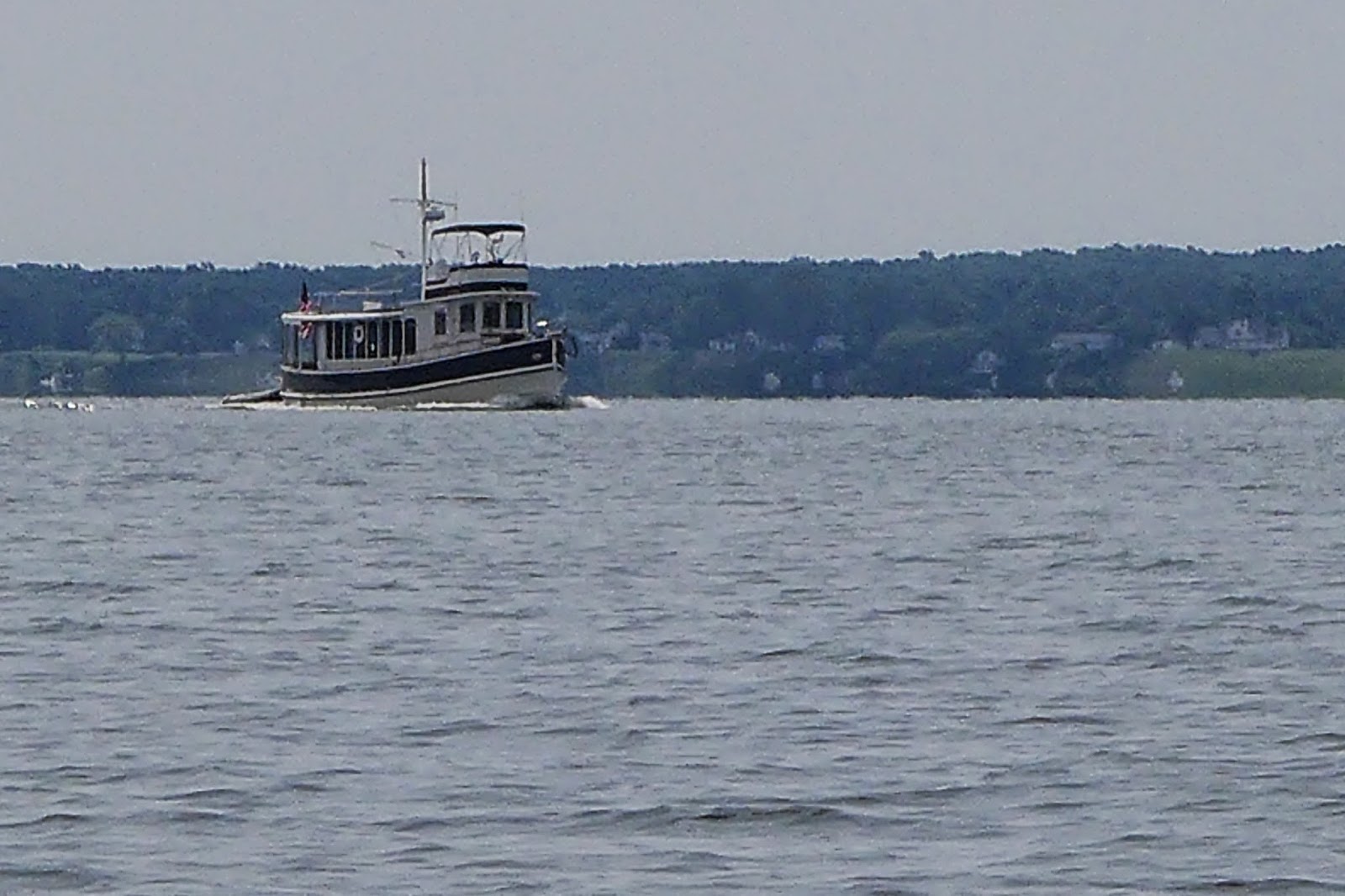 The ramp pier was well populated with kids at day camp from the local YMCA. They were crabbing and fishing and having great time. 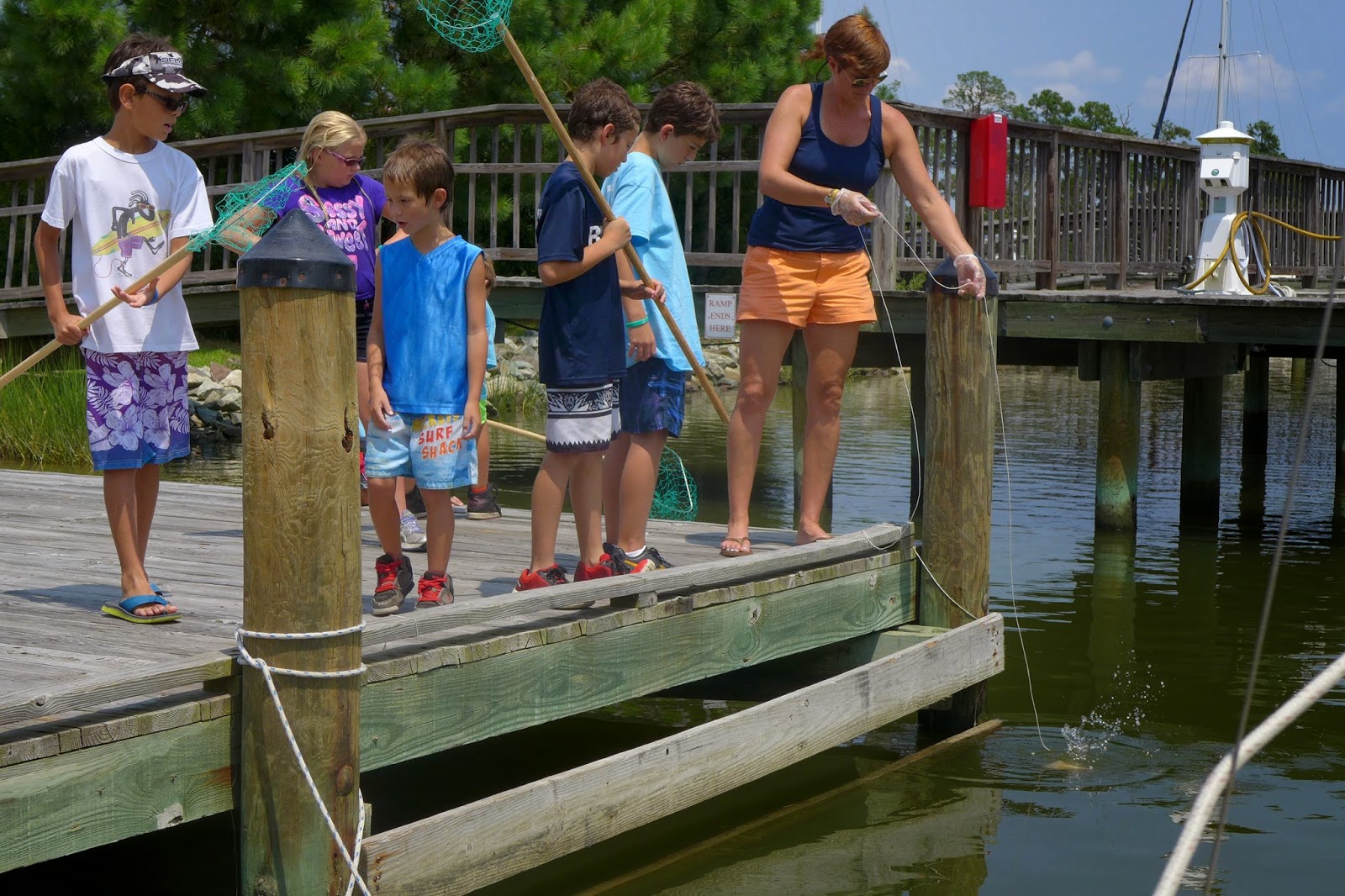 On return from Deltaville I passed beautiful farms that flowed toward the river. It reminded me of when we lived in an old farm house overlooking the Patuxent River in Southern Maryland. But that's another story. 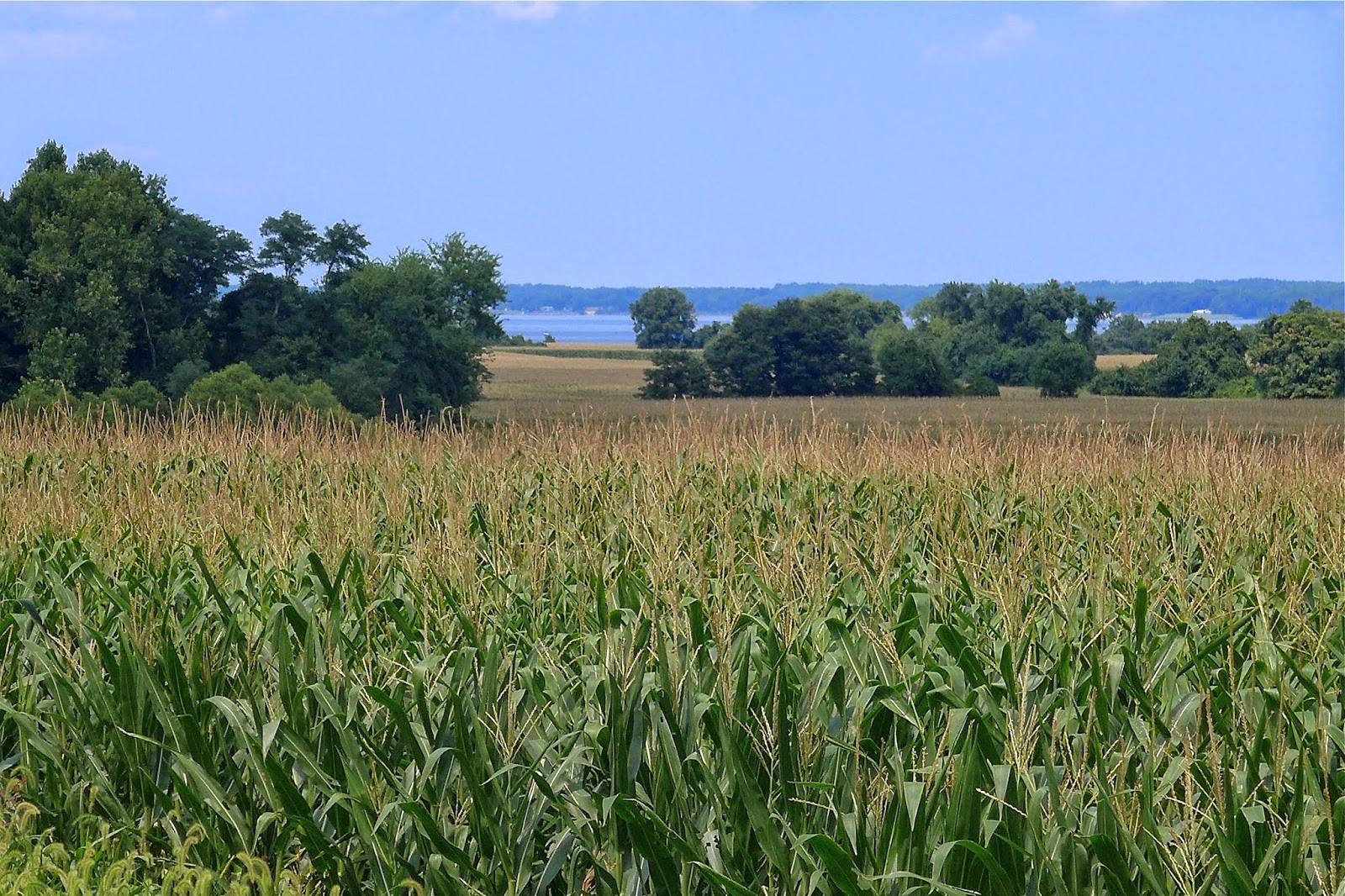 Grabbed a nice dinner in town and found a quiet place to anchor in Urbanna Creek. With a low dew point I decided to slept in the cockpit under the stars. 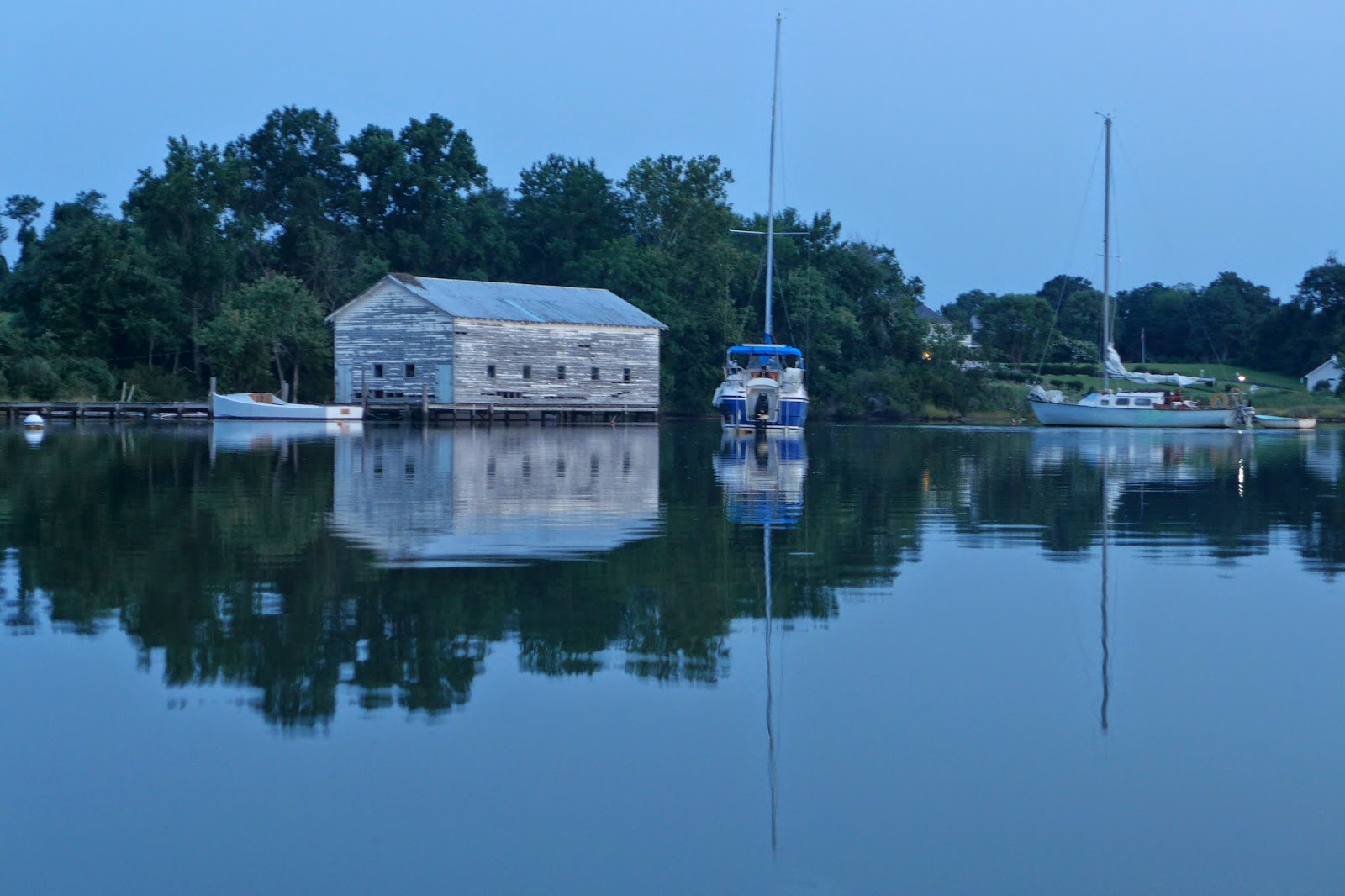 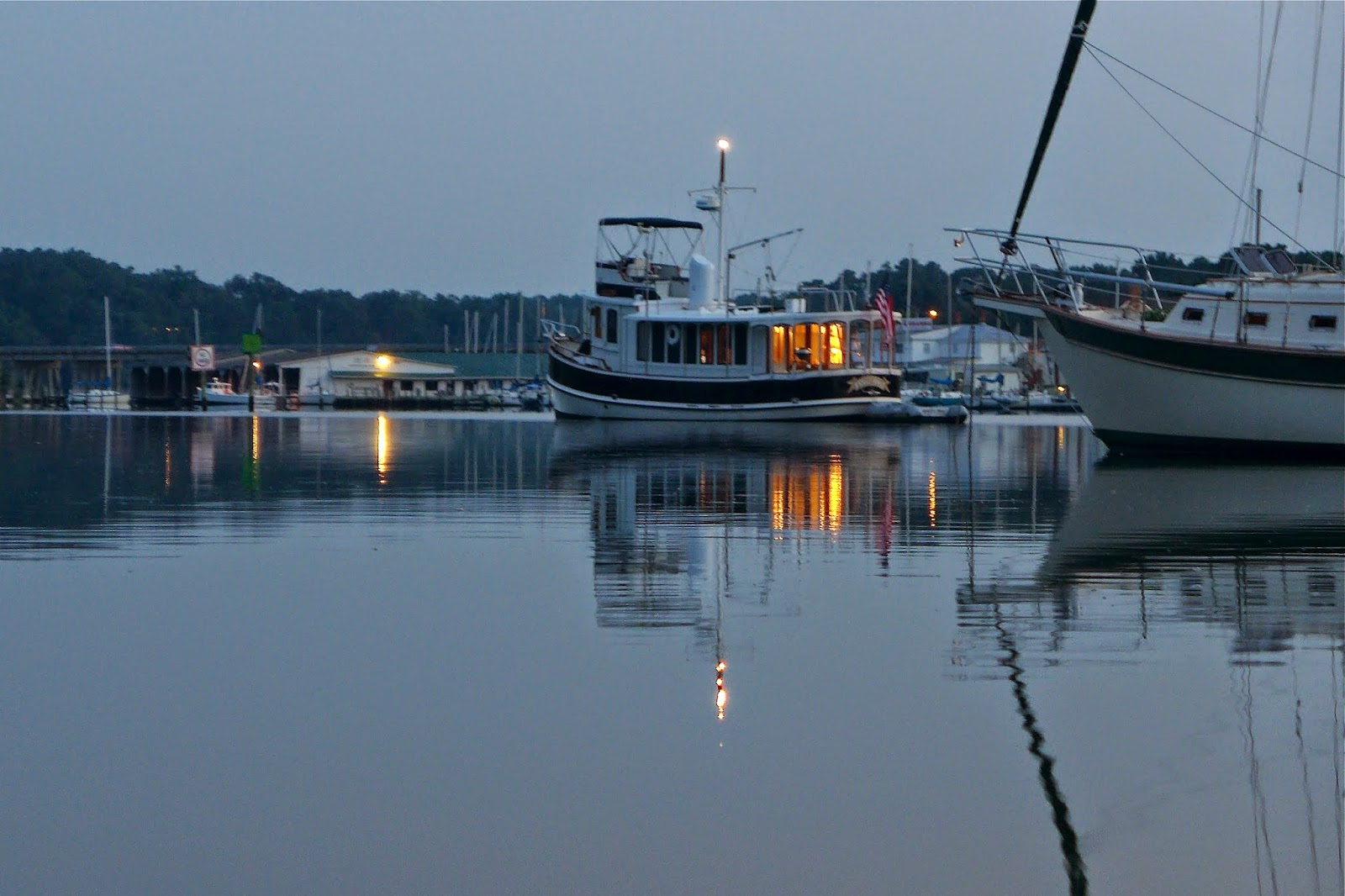 Morning started a beautiful day as I watched watermen work the creek. 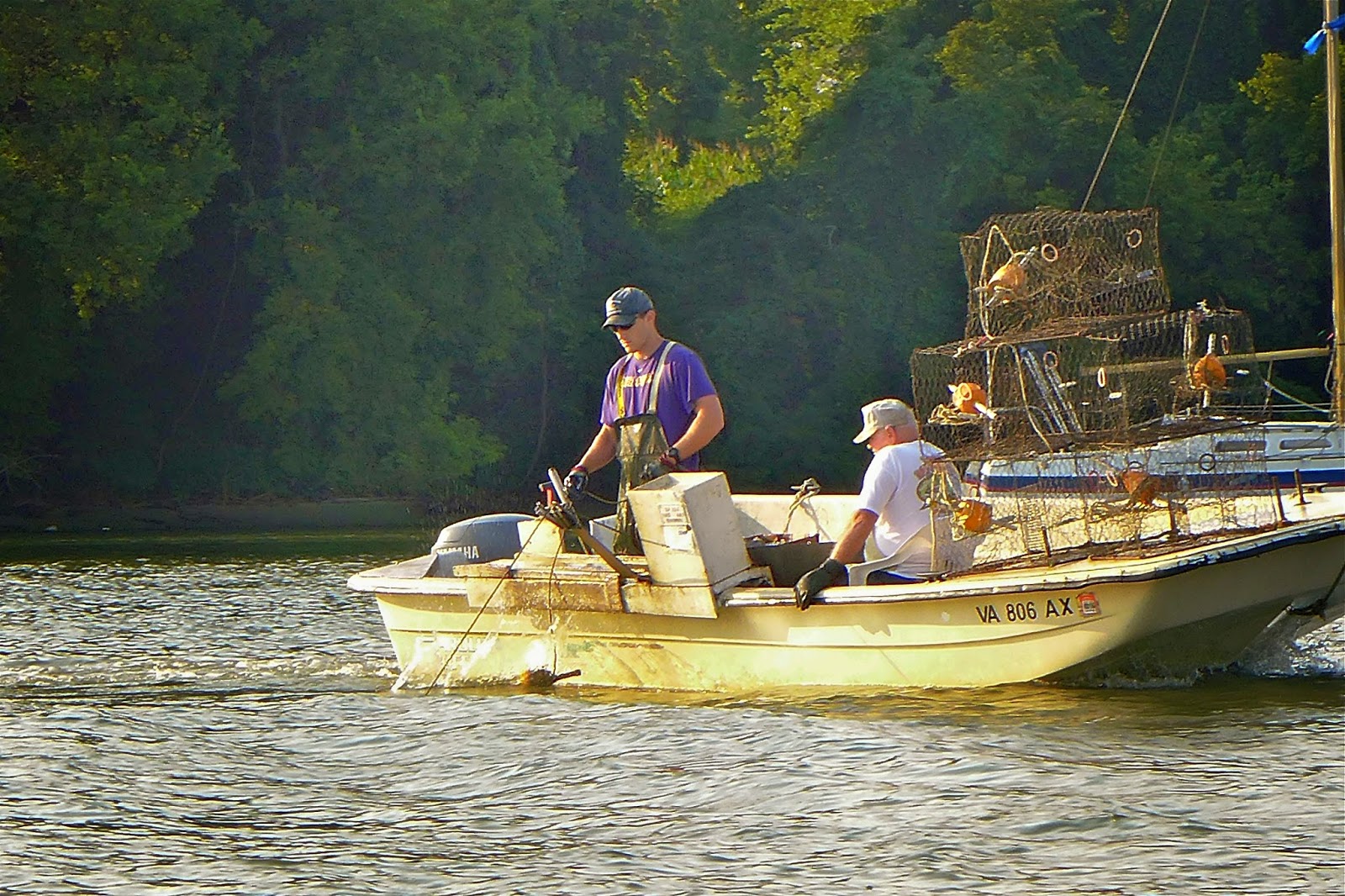 My friends John and Vera... at whose place I store Annie... left out just before my return. They are taking the museum's buyboat F.D. Crockett to Washington DC via the Potomac River. They have an annual meet-up and are leading players in buyboat preservation on the Bay.

So as I buttoned up Annie I took these pics of their world... 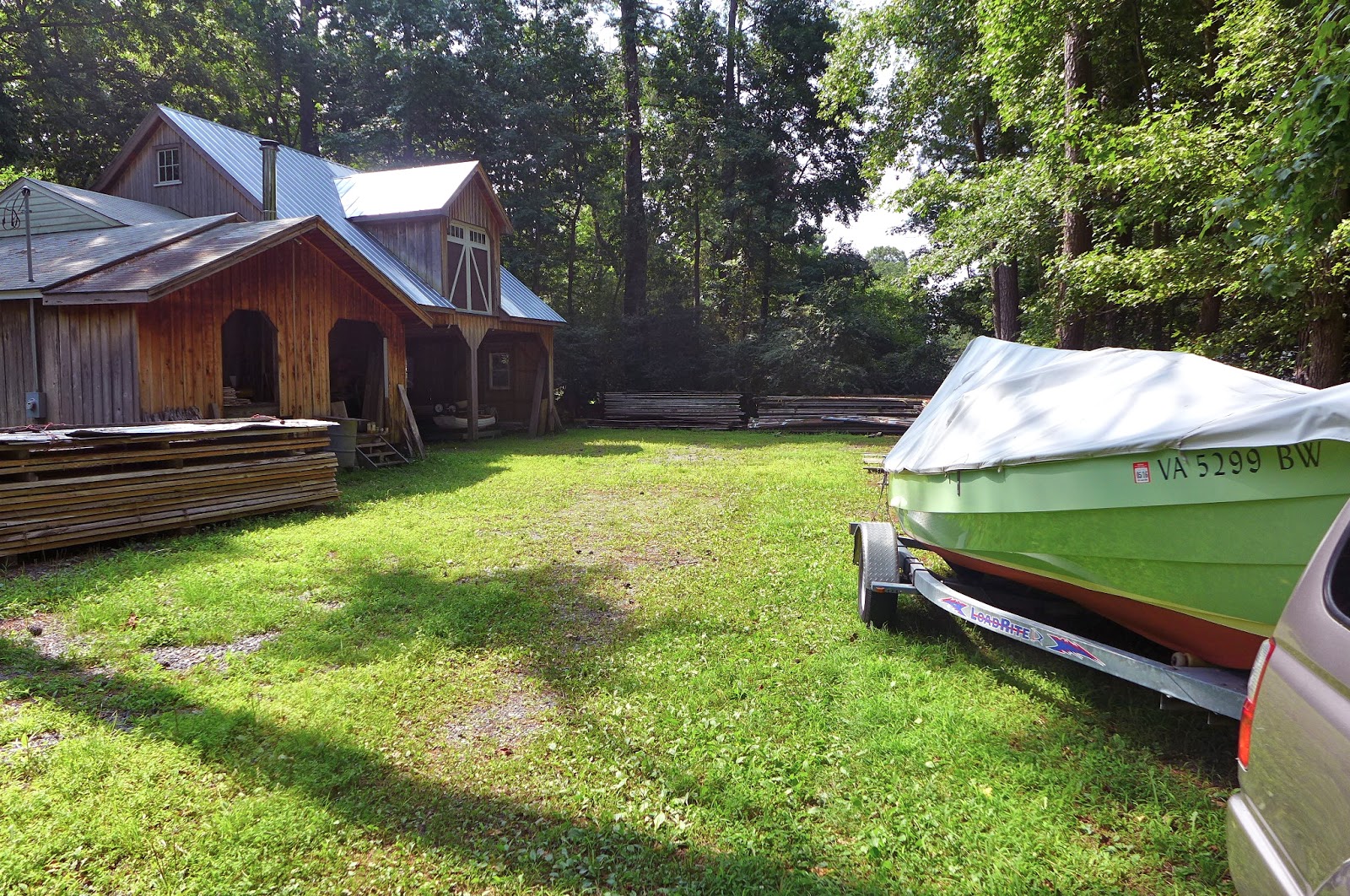 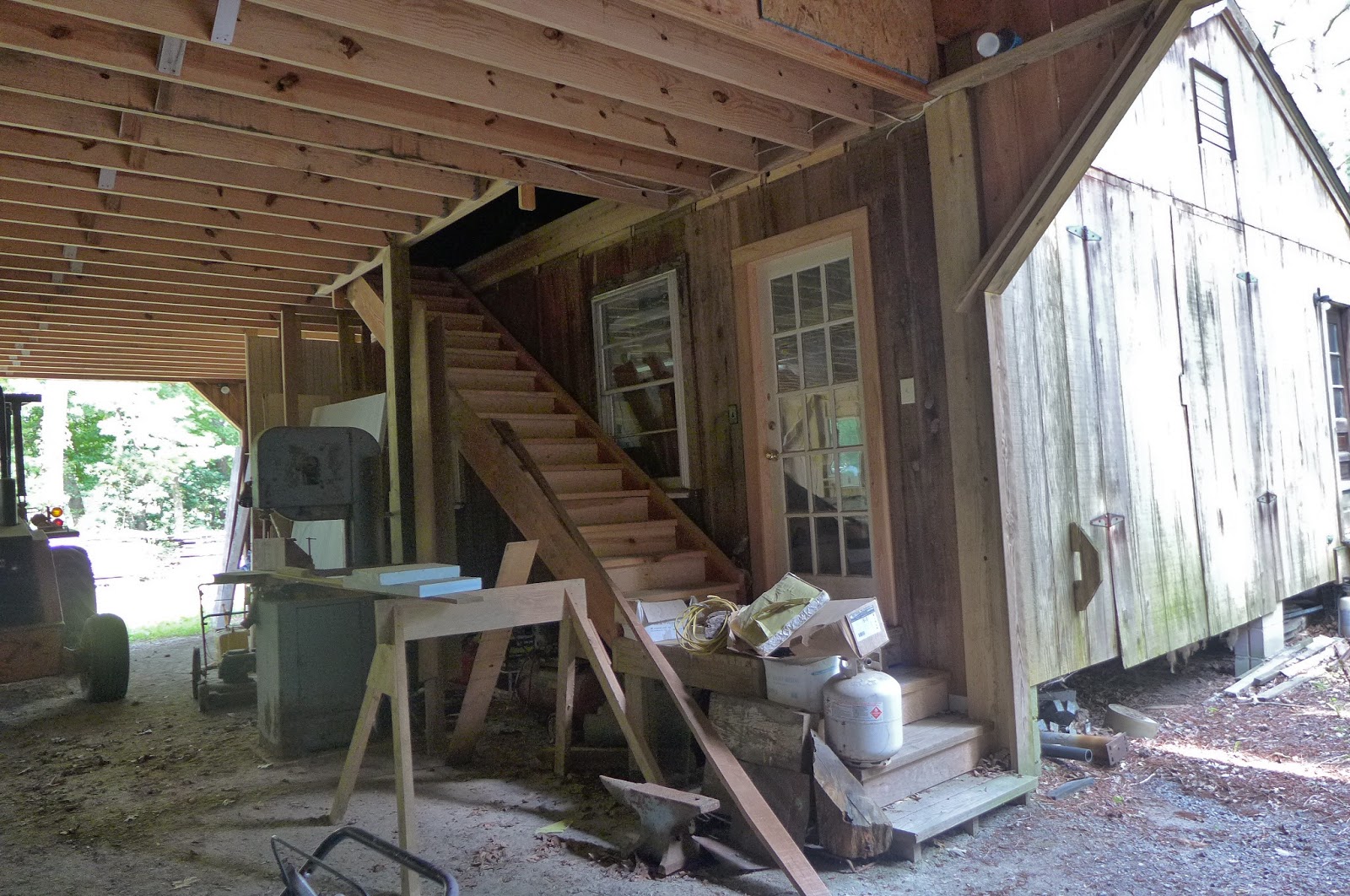 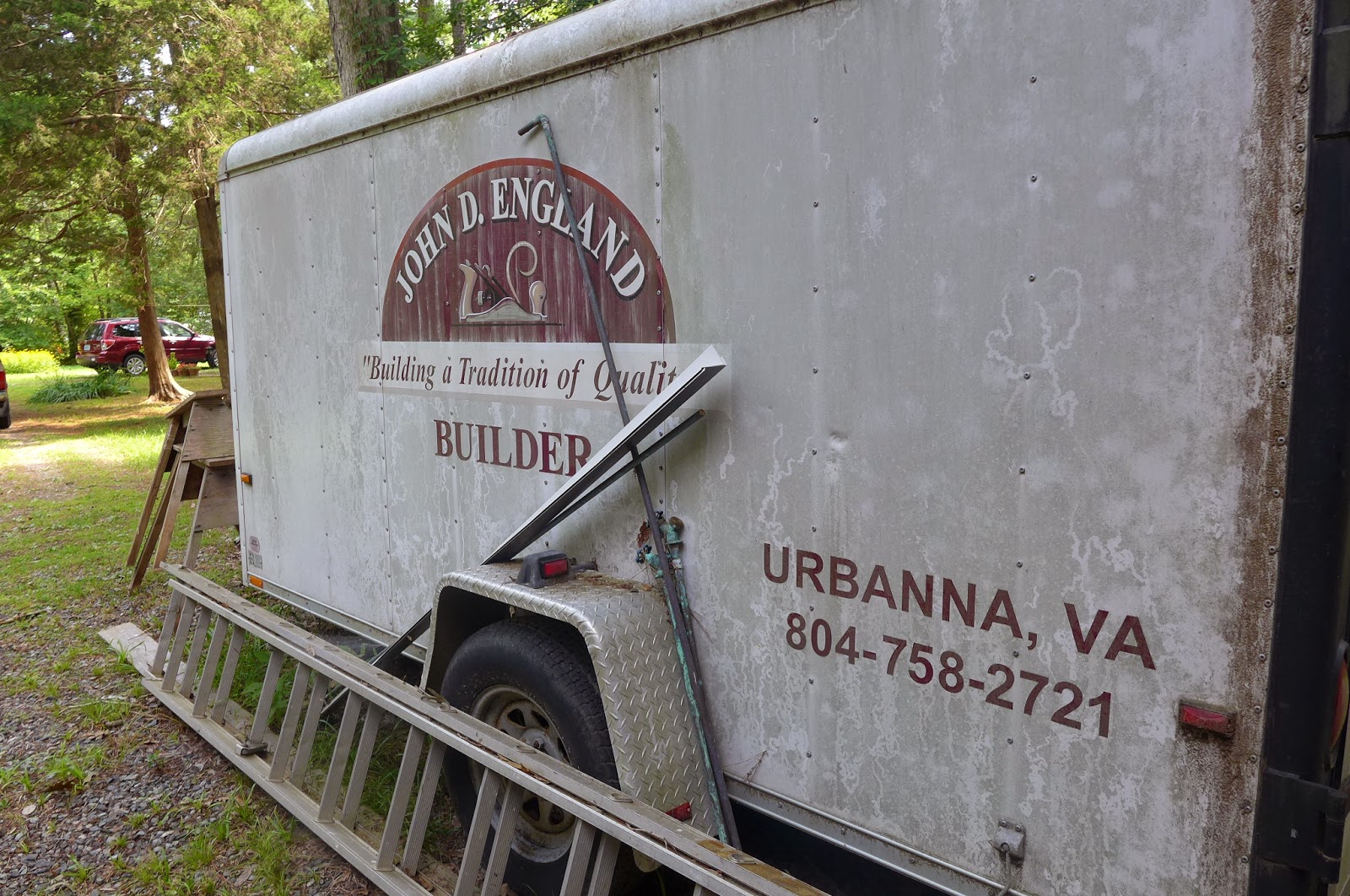 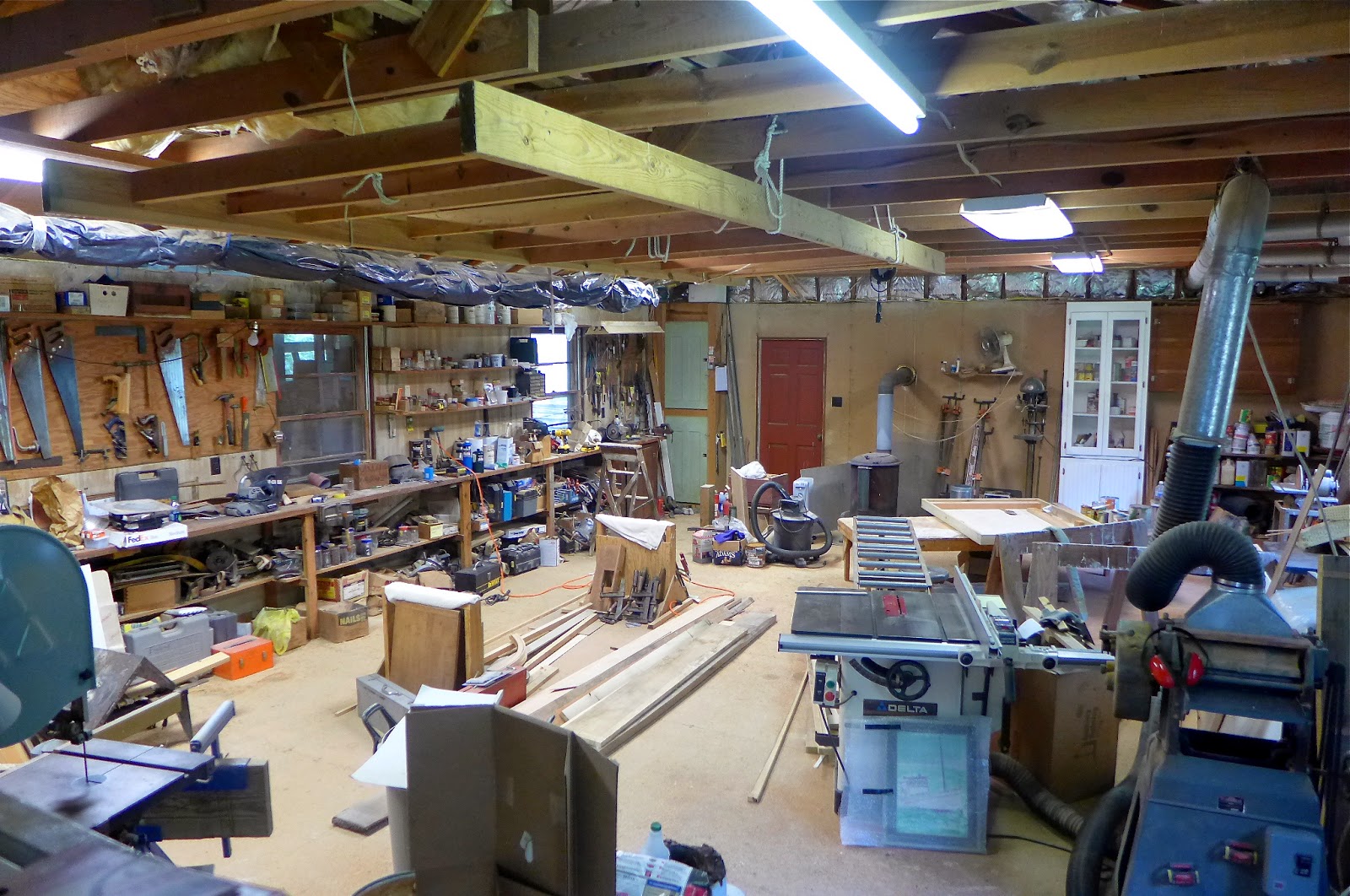 A quick trip... but we got on the water. What more can I say?

Annie's headsail was made with a wire sewn in the luff that formed the head stay, an eye swaged at each end. The stay was pinned into a Harken roller-furling swivel at the head and its partner reel at the tack. In light airs this configuration is very effective and welcomed by a single-hander with a cabin between the bow and the helm.

I found out quickly that when the wind freshened the ability of an unassisted wire luff was of little use in reefing. The tack furled positively, but the head swivel could not hold under the pressure. The set was less than desirable to say the least.

A couple of years ago my friend Terry and I set out to stiffen the luff. I bought a length of Schedule 40 aluminum pipe and with a jig on the table saw we cut a slot that the sail-covered luff wire could fit in. Before cutting the pipe we stretched the luff using the trailer hitch on my truck. The pipe length was cut to just cover the wire eyes at each end and holes were drilled in the pipe ends corresponding to the eyes.

Since the luff was originally cut short and required additional wire pendants, it was necessary to add rigid, dinghy-sized chain plates to each end. The tack included a stainless snap shackle. When all set up, including additional spaced grommets seized to the pipe along the luff, the whole run became rigid.

The modification has worked. On occasion, in a force 5, the reefed sail sets well. The $50 cost has been well worth the investment. 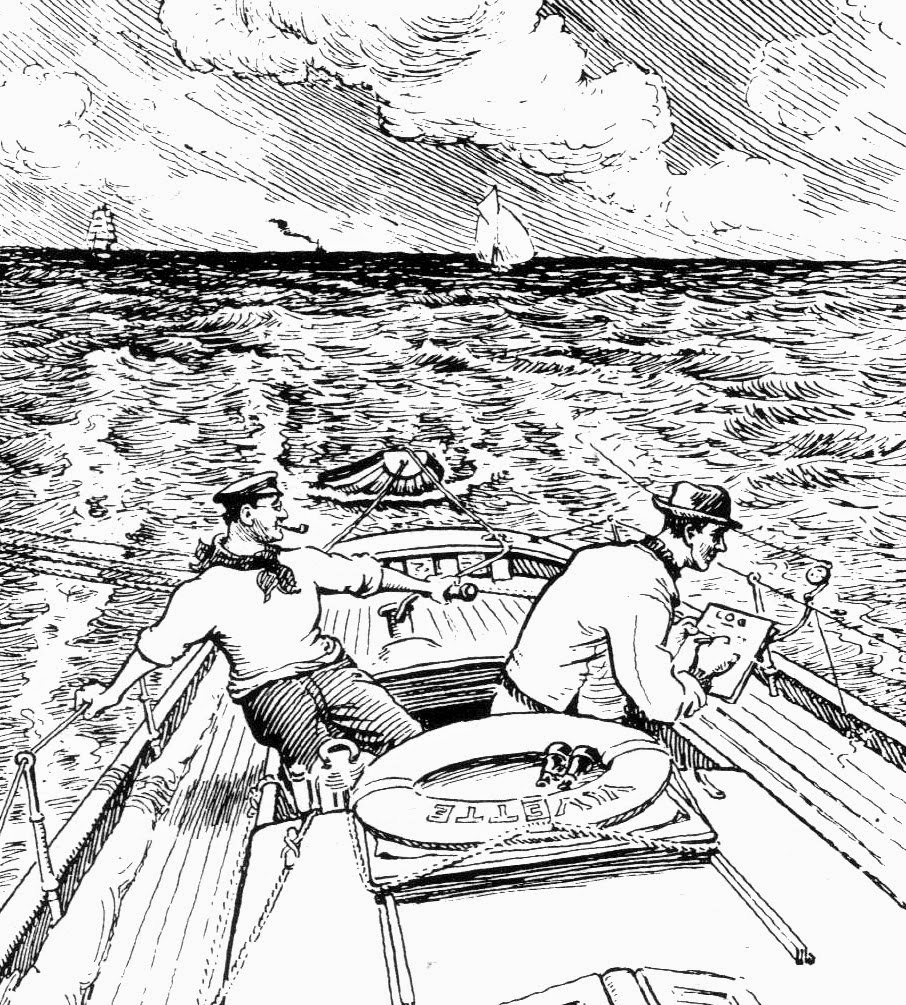 The backpacking trip was a blast. Twelve people of every age and description climbed up and down, over rocks and through heavy brush, in the rain and shine. It was beautiful. I got my pack down to 25 pounds and it is a good thing. Another pound might have done me. 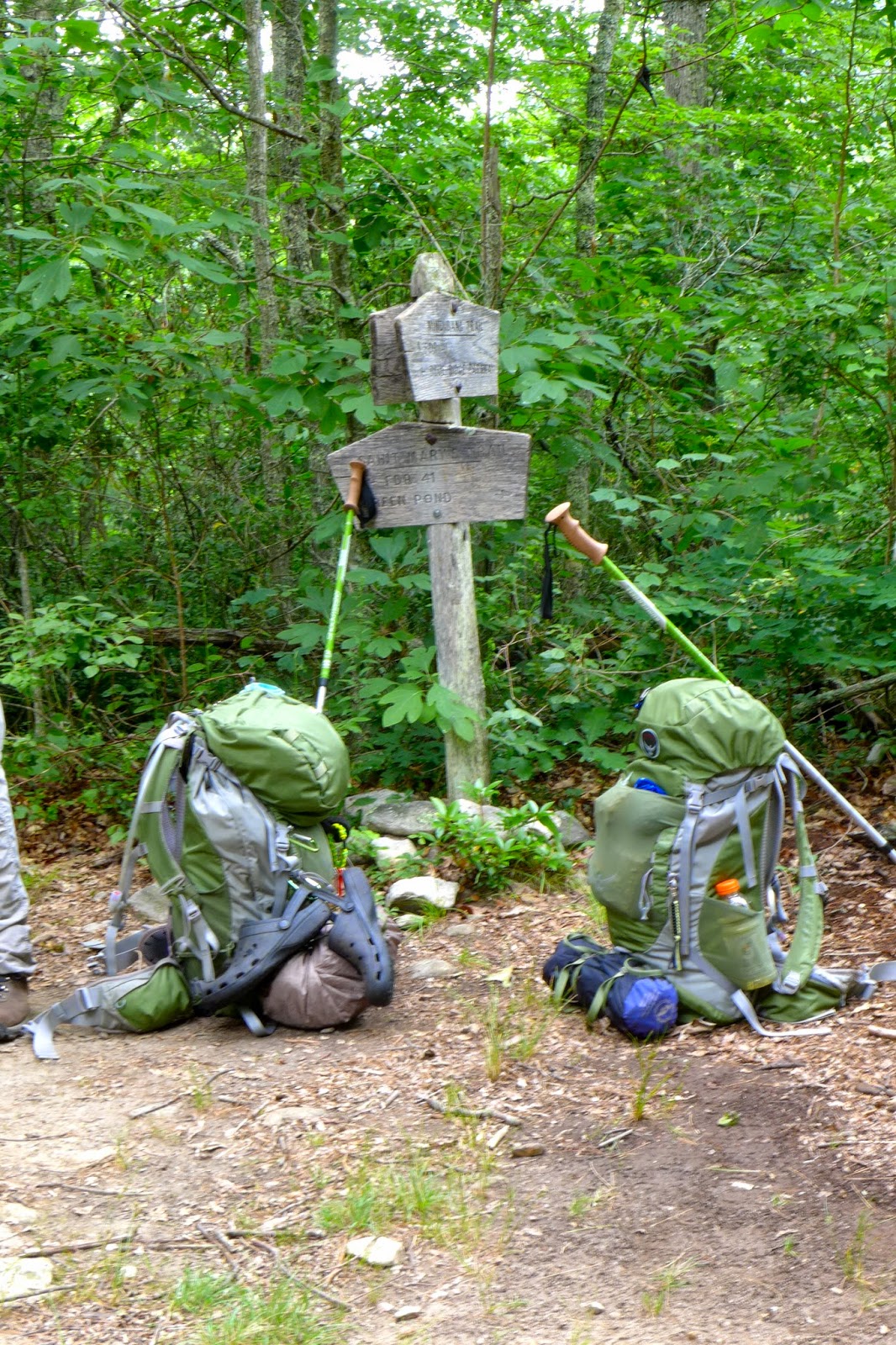 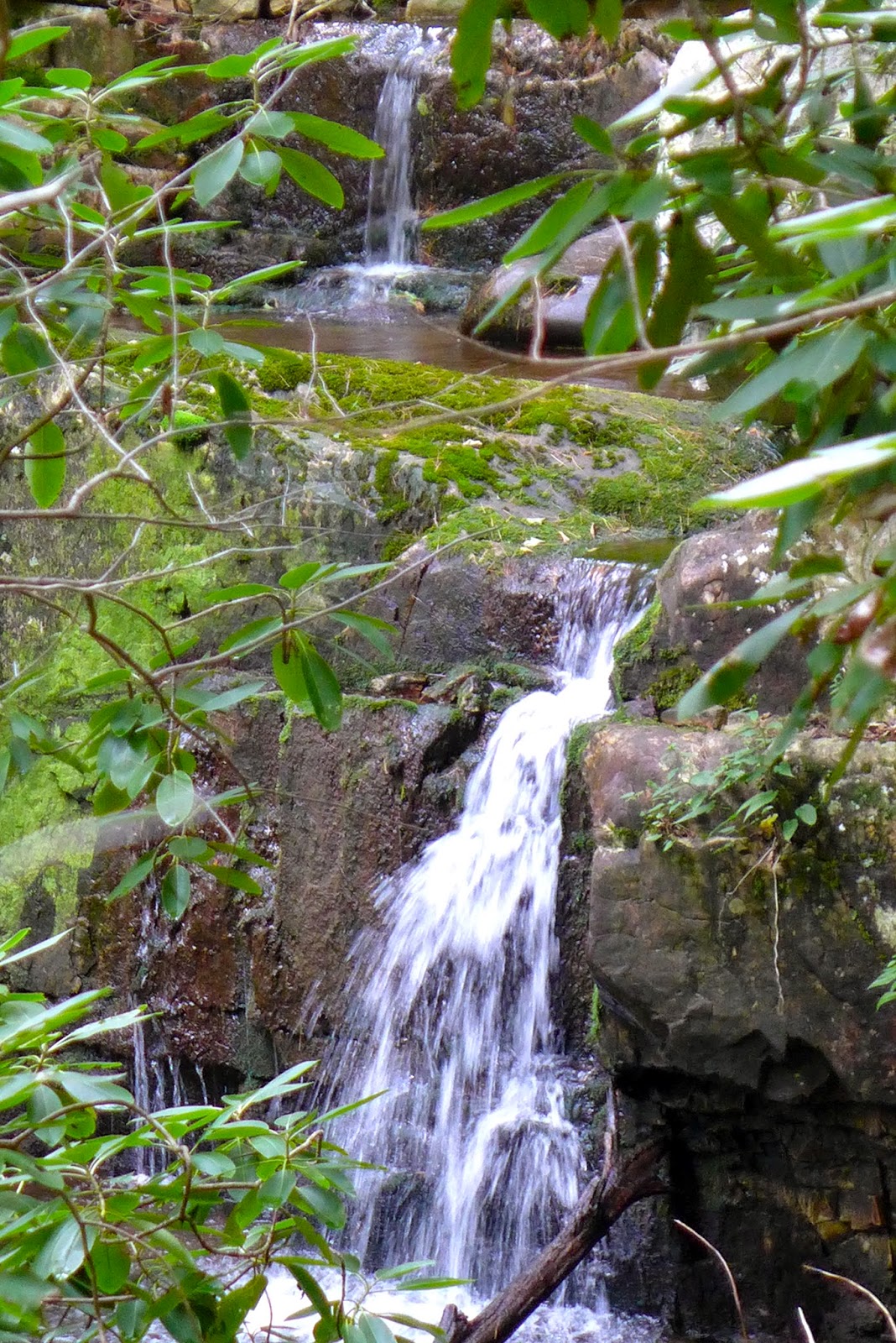 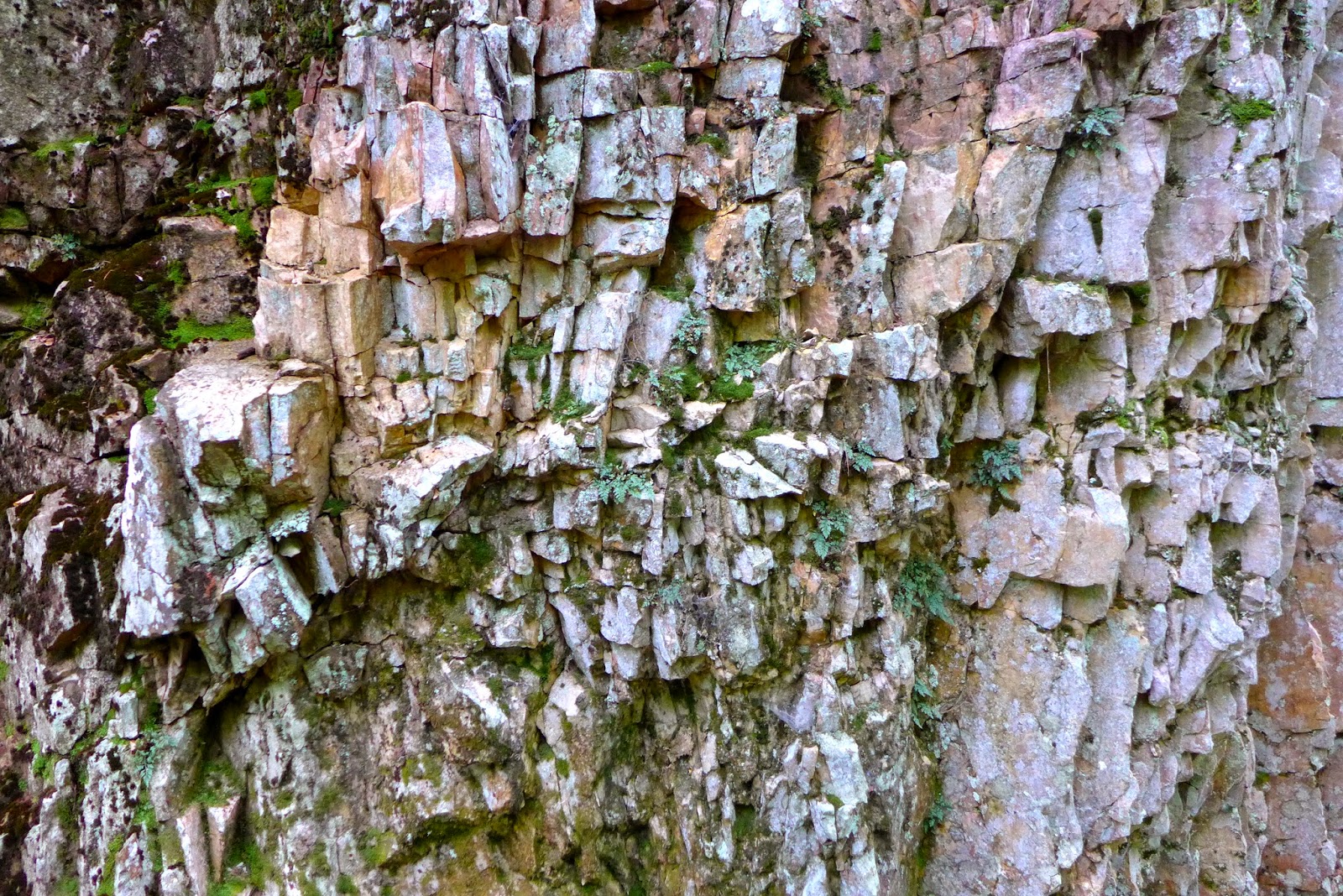 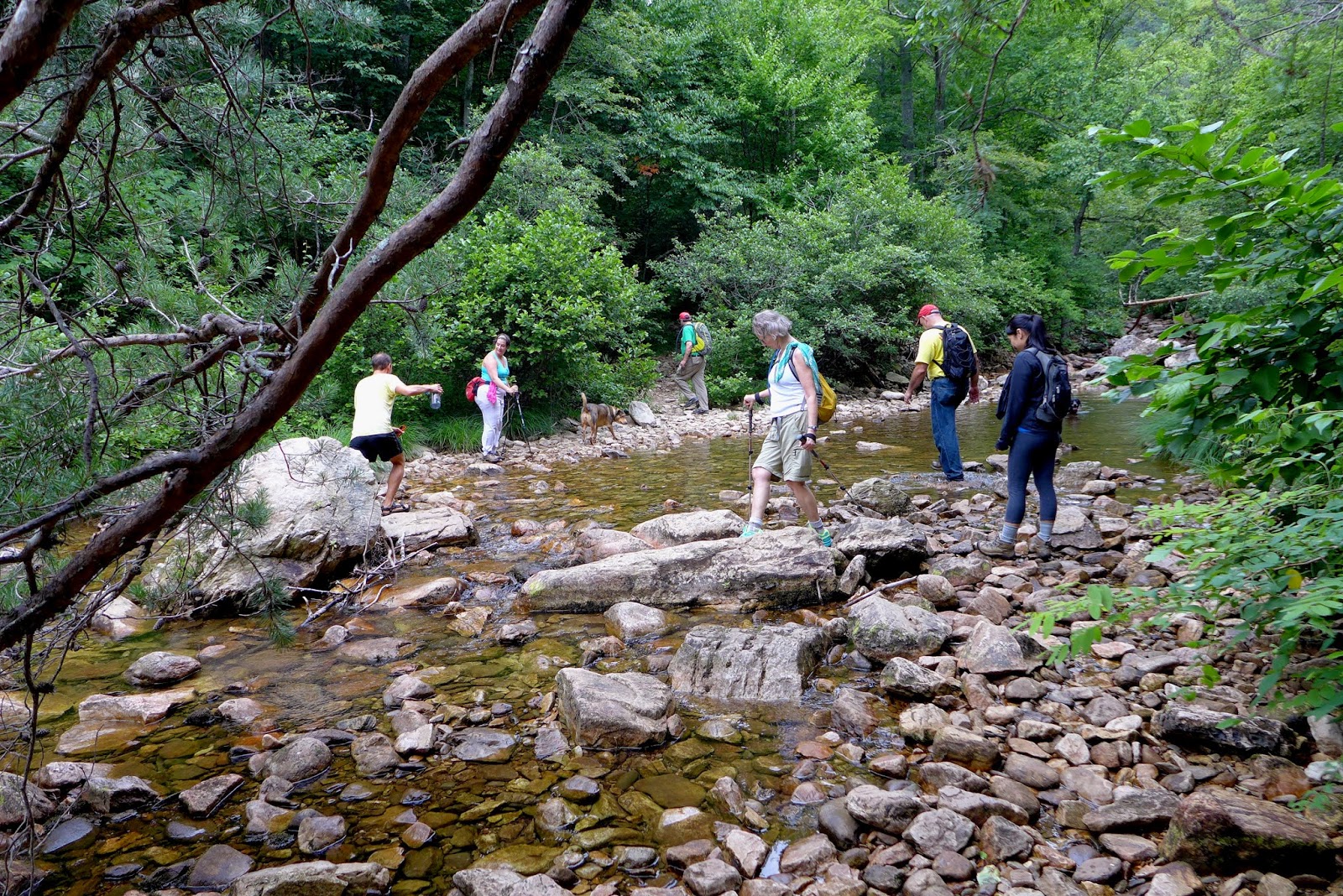 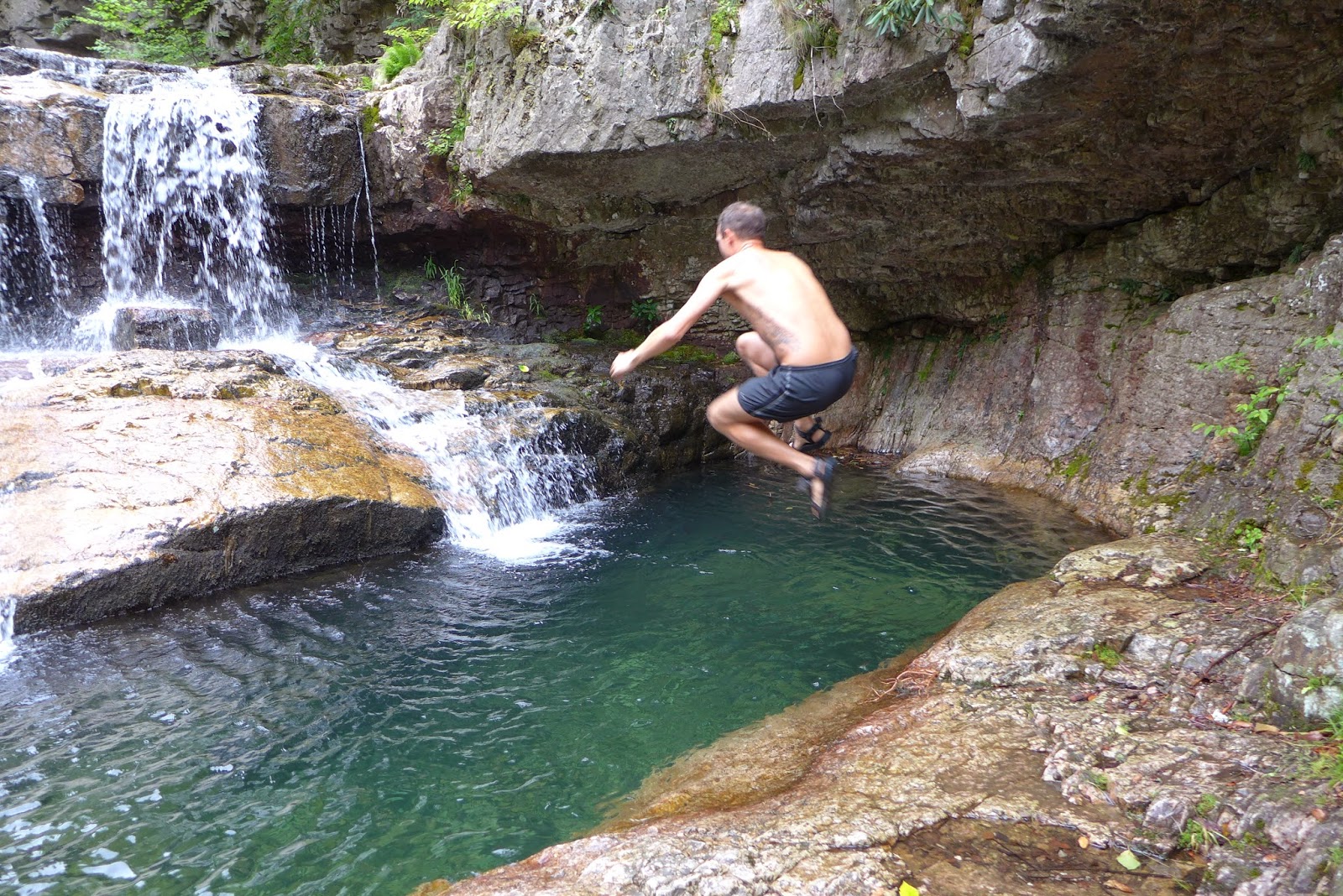 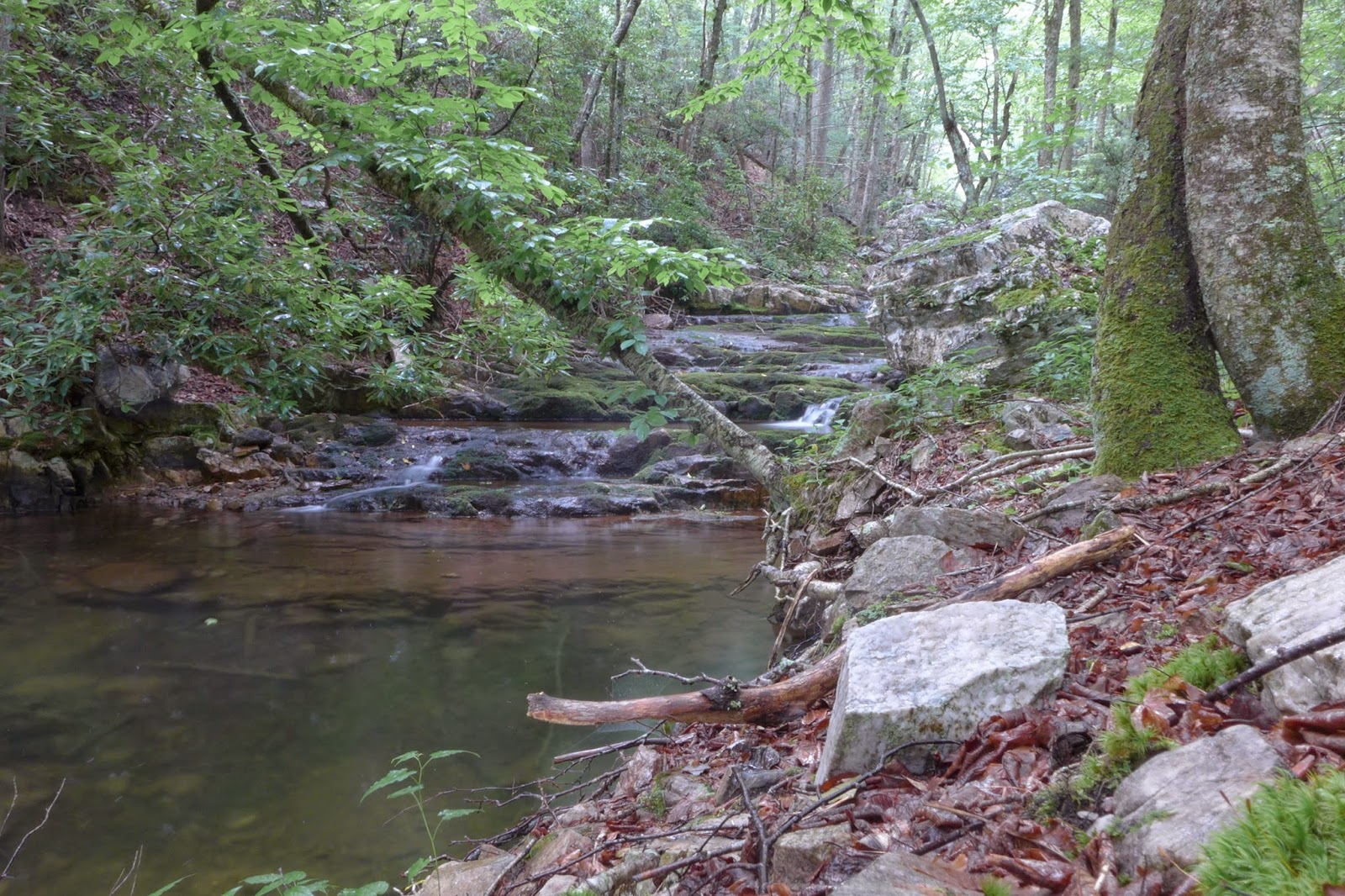 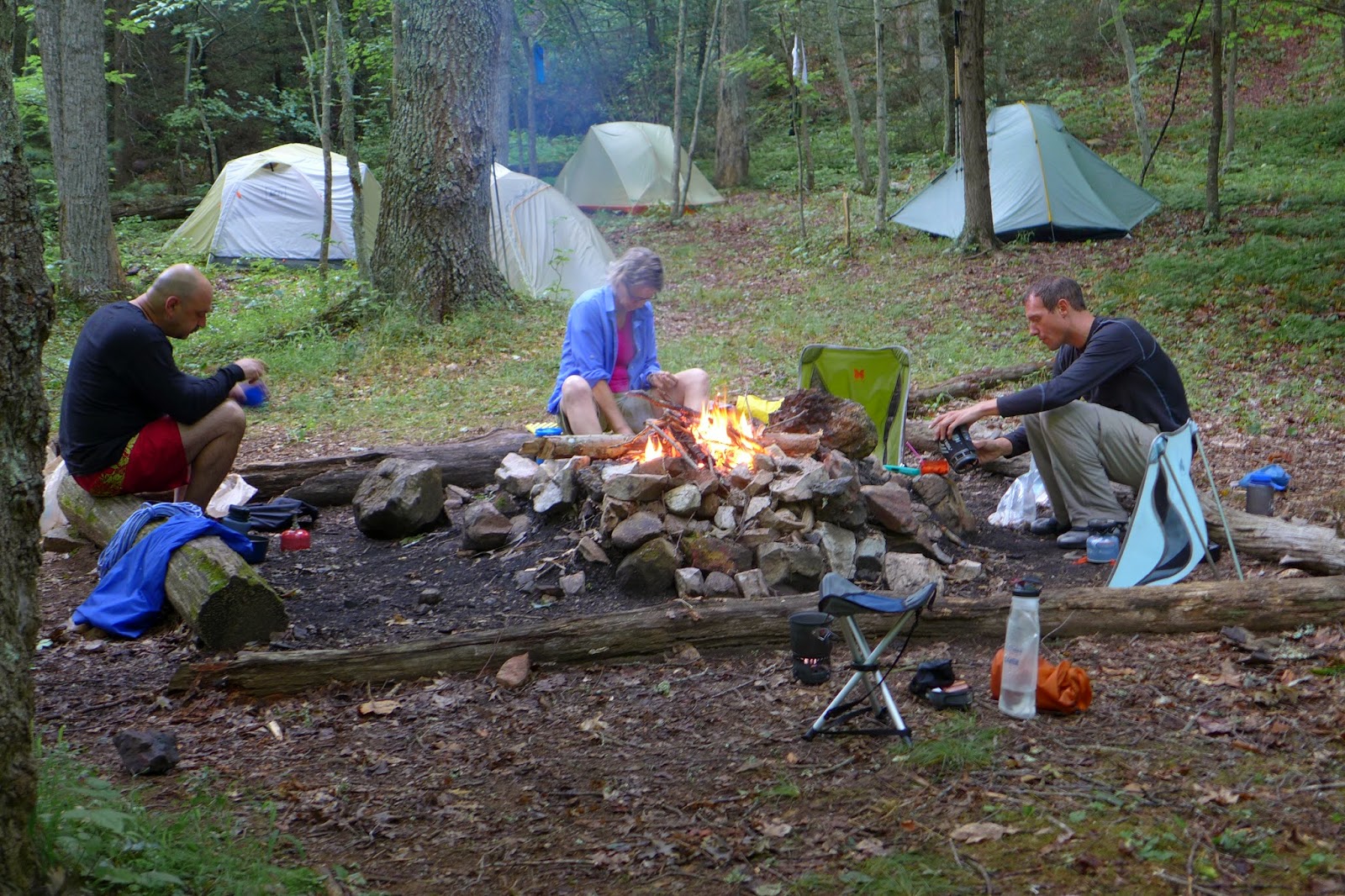 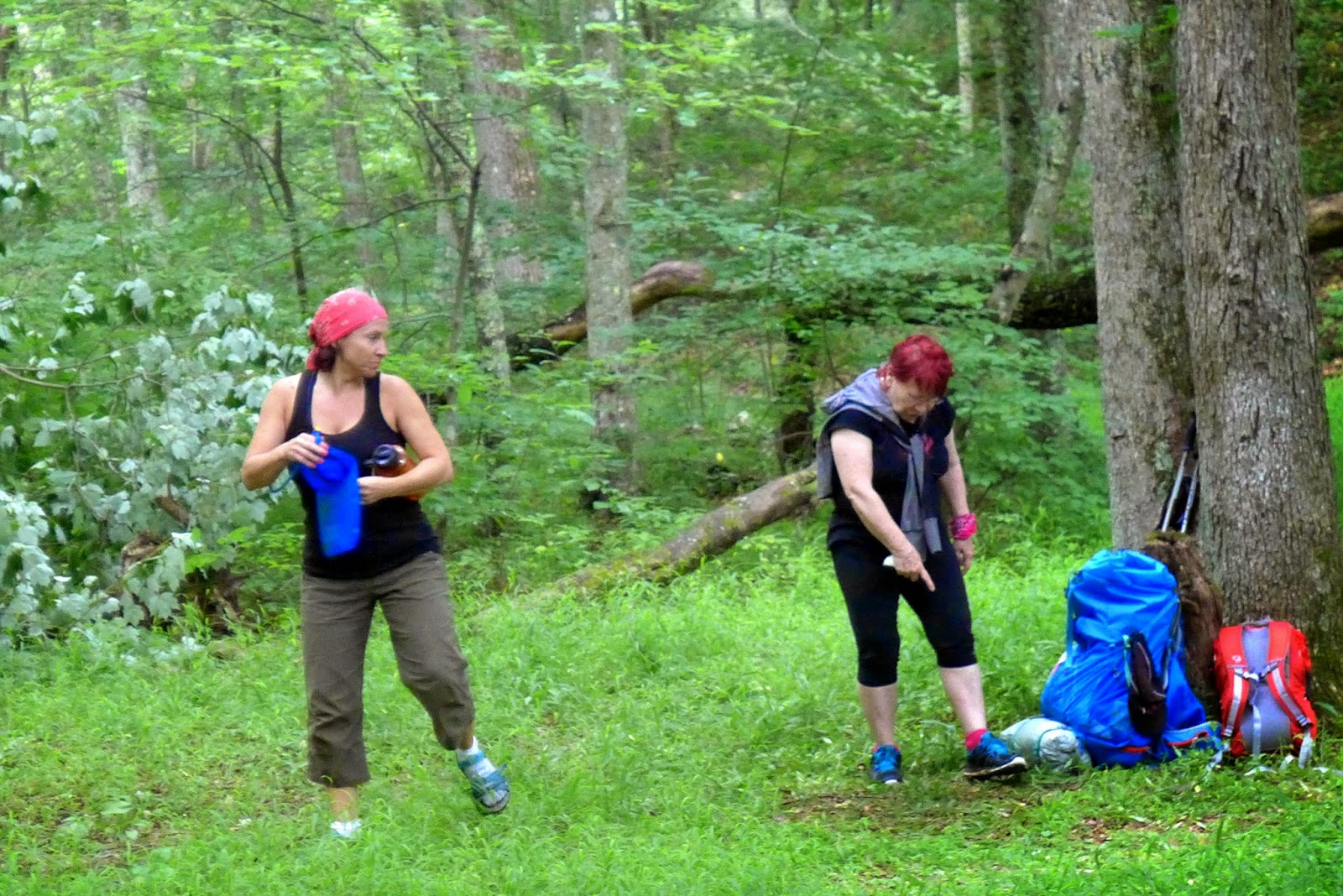 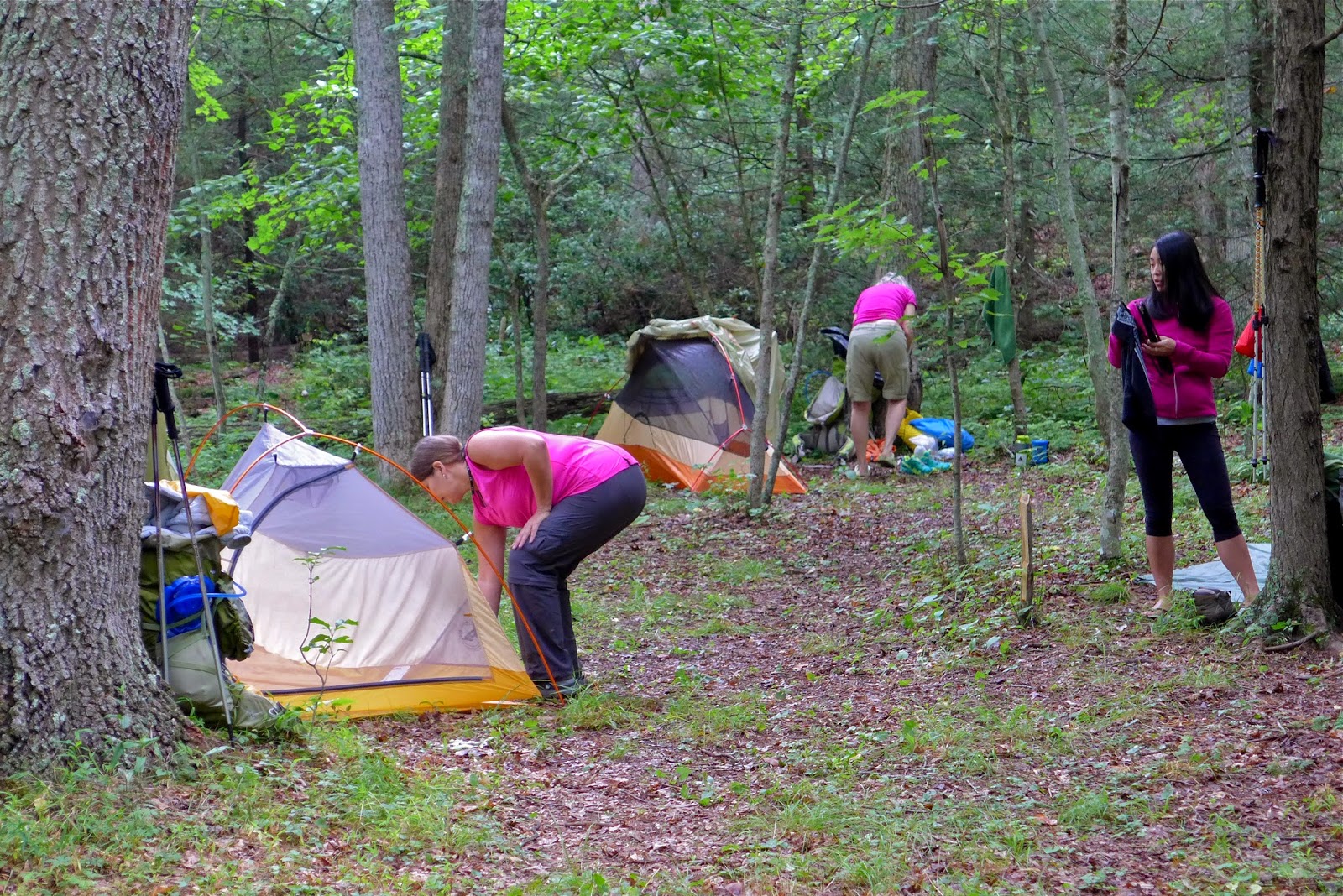 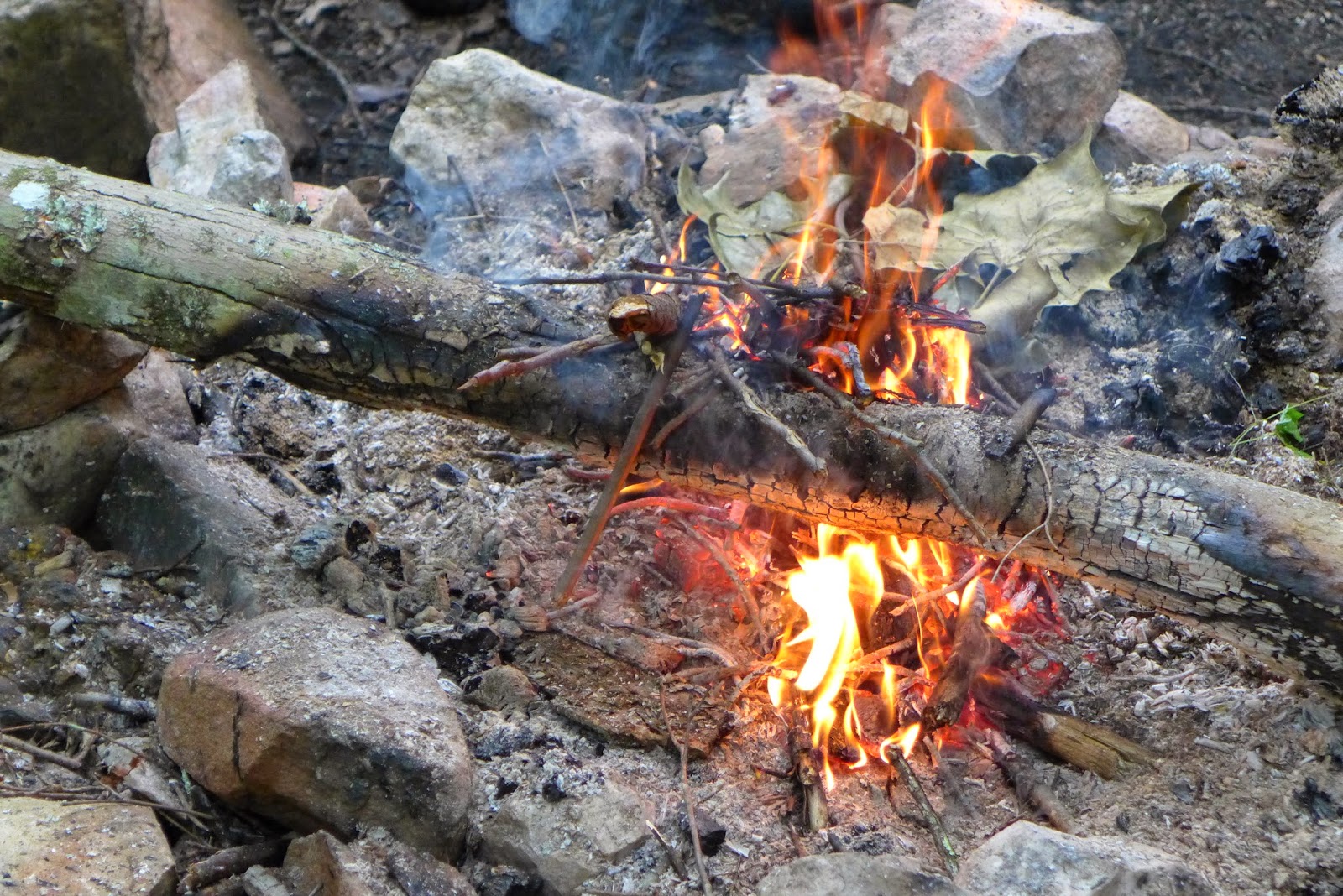 I'm not much of a hot weather sailor. In fact with afternoons in the 90s I've been thinking about the mountains and the shade of the high trees there. So backpacking is back in the picture after a 40 year hiatus. Have joined the Central Virginia Trailblazer group and am looking forward to an Shenandoah trip in about a week.

Essentially it is what we do in small craft. A strong back (hopefully) substituted for a bit more gear in a strong boat. So as the sun beats down outside I am pre-packing in the basement and hoping all will go well. More later...

It was a good week for sales with two large maritime-series paintings finding new homes. I also got in a fresh batch of small 8 " x 10" prints that I'm offering through my website. Thanks to Ellie for encouraging me to 'hold fast'. Check it out here. 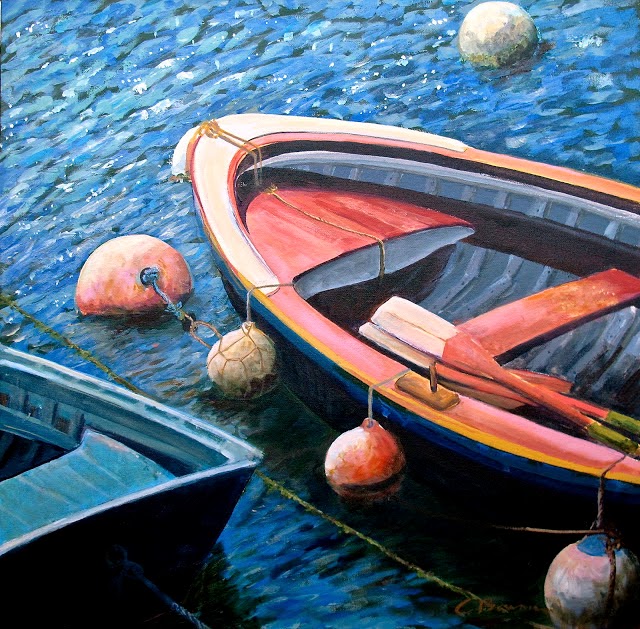