Sunday May 8, Mother's Day. I have been sailing around the southern Outer Banks area of North Carolina for a week. I am feeling the groove set in... pulling the 'puppet strings' and watching Annie dance, feeling the weather changes and getting used to being alone. I awoke thinking about my early plans that included crossing the Pamlico to Ocracoke. The village is often frequented by ferries full of visitors in cars, and cruising yachts. I had concerns that stemmed from accounts of rough 35 mile crossings in 20 ft. deep water that was open 50 miles to the wind to the north and 25 to the south. Chop could be tough in a small boat. I turned north and decided to go up the river to Vandemere. 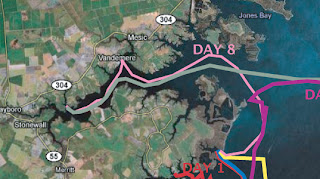 A procession of other boats were also on my line for it was part of the Intercoastal Waterway. I left company after a few miles and started up Bay River, on a beam reach to Vandemere. Passed along the waterfront and saw no sign of Alan's yellow Core Sound 17 or B&B Yacht Design and boatyard. I tied up at a boat ramp and started to walk to find ice, water and gas. While dropping trash at a deserted post office a black man pulled up, mailed his letter and offered to give me a lift to the store about 1/2 mile up the road. They had all I needed (including an ice cream bar) and the fellow brought me back to the boat. He also reminded me that it was Mother's Day. I called Ellie and had a nice conversation. I missed my Mom.

After getting an address for Graham Byrne on the IPhone I walked to Elm Street and found him at home. He and his wife had just walked in from the Wooden Boat Show in Beaufort. We talked boats and walked down to the ramp to show them Annie. He offered me a dock spot for the night at the boat shop that ended up being several miles further up river. I sailed to Chapel Creek and was met by Graham and a couple (Laura and Charlie) on a Rhodes Meridian 25. Toured the shop and turned in.


Posted by Curt at 3:29 PM
Email ThisBlogThis!Share to TwitterShare to FacebookShare to Pinterest