Day 7 Back to the Neuse

I awoke in the creek with the first glow. The netting over the companionway was covered with mosquitoes intent on one thing... getting at me. I kept down below, had breakfast I had stashed the night before and cat napped. When the sun chased the bugs away I climbed out and wiped down the rainwater that had washed away the salt on deck. It was cool and clear with the wind coming out of the southwest. I fished a bit to no avail and decided to head out. We tacked up West Thorofare Bay that ran by Cedar Island and the largest salt marsh I think I have ever seen.

Reached up Long Bay and into the Old Canal (also known as Indian Ditch).  Tacked about ten times down Turnagain Bay until it opened into the Neuse River.


I decided to go over to Vandemere to check out the B&B boat shop and Graham Byrne, the designer of the Florida Everglades Challenge-winning Core Sound boats. The wind was back SW and as I reached NW I noticed a large brush fire in the distance. 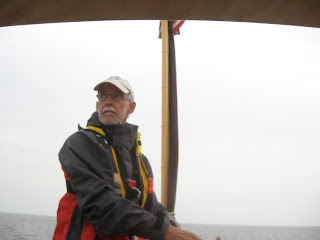 It appeared to be just before the Bay River where I would turn to port. As I made about 6 miles across the mouth of the Neuse it appeared that the fire was coming from the Vandemere direction and smoke was funneling right down the river. I opted to bear off west and make it for  Swan Creek where we had anchored the first night. I followed my earlier track over the bar and settled in.
Posted by Curt at 6:21 PM