Day 6 on the Outer Banks

Up at 6 after a nice dinner with Alex and Chet at Spouters. They had prime rib and I, clams. Thought that going light would help me sleep and it worked. I slipped off the dock in the dark without making too much noise and slowly motored by the houses along the quay into the river behind Harkers. The guys opened the bridge (I need a nice horn) and continued into Core Sound. I had tied in a reef but soon shook it out to get by the island. Up the sound I broad reached picking up strung-along markers using the chart and GPS. Both were becoming constant companions.

I doused the main and tied to the deck. Not easy but good practice with 15-18 knot wind and short, quick chop on the beam as I worked. The roller-reefing headsail came in first in the process and the mizzen sheeted flat to hold her into the wind. Annie yawed from side to side and surfed sideways.

I went to 1/2 reefed headsail and furled the mizzen as we followed the zig-zagging course. Our speed fluctuated with gusts, going from 4.5 to 6.5. It was like coasted down the road hoping not to run off the shoulder. Small villages and coves passed by that I had reserved for escape. Around lunch time we cut into the small town of Atlantic in search of a shrimp burger that friend Steve had spoken highly of. A dock was at first not apparent but soon saw a set of red & green tape festooned PVC markers that led back into a small creek lined with docked fishing boats. It appeared deserted but as I steered back out I noticed an older fellow and possibly his teenage grandson mending a net. I called out with my desire and he pointed to a dock and said "tie up there... the shop was down the street." He warned me to be careful and in the picture it is easy to see why. 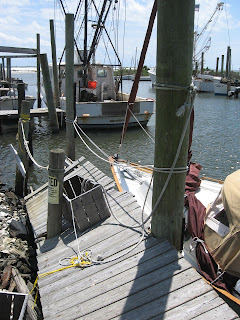