Up the Western Shore Day 2

I had put on the lights the night before and cast off around 0500 in the dark. The creek leading out to the Piankatank River was very narrow and winding. My flashlight picked up a series of PVC pipes with ends spray painted red or green marking the channel. We continued into the river tacking against an east wind toward Sting Ray Point at the southern end of the Rappahannock River where in flows into the Chesapeake Bay.

As the sun broke over the Bay the wind slowly increased. I had tied in a double reef in the main before setting off and with half of the roller-reefing headsail and half of the mizzen... we were making good way close hauled. Rounding Sting Ray Point the wind swell came from the northeast with an east wind enabling me to quarter the 2 to 3 foot chop on a beam reach. Up and over. Great sailing. 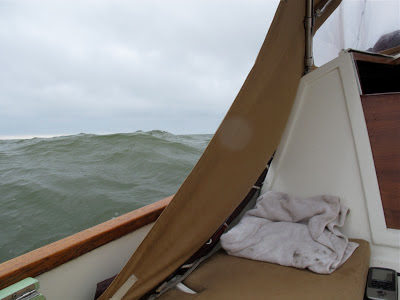 I crossed the Rappahannock and entered a small cove just west of Wind Mill Point. A somewhat deserted marina community... with high end amenities but not a soul in site. I tied up at the gas dock for a rest and spread wet foul weather gear and towels to dry in the sun that had popped out. It said it was open but that sign must have been left up by mistake. A woman appeared out of nowhere in a golf cart and wanted to know what I was up to and when I said gas... there was none and that was that. She left and soon so did I. 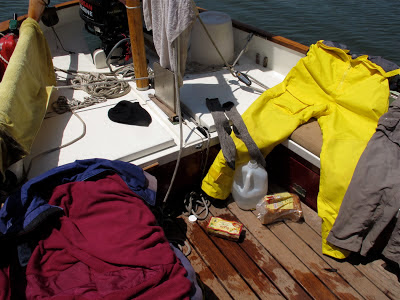 A long tack under reefed jib and mizzen took us around Wind Mill Point and thrilling reach to Dividing Creek entrance. The wave heights increased and some tops broke. There were several waves that stood out... maybe 5 footers. I was standing in the cockpit holding the tiller and the dodger and a couple appeared to be overhead. I'm 6 feet tall and they looked to be a foot over my head. So I'm guessing 4-5 to account for optical exaggeration and my own excitement. The wind had moved to the northeast as I happily maneuvered into the creek. It was only 1430 and was in for the day. 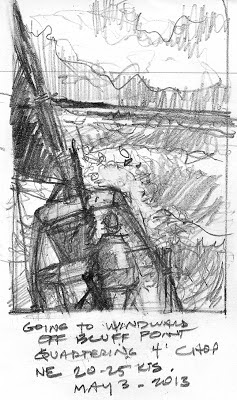 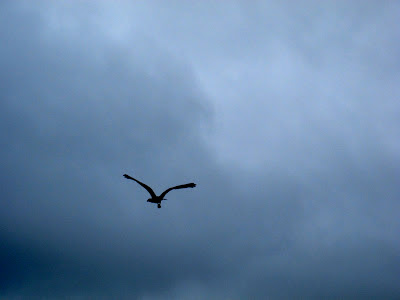 Posted by Curt at 10:55 PM
Email ThisBlogThis!Share to TwitterShare to FacebookShare to Pinterest