Up the Western Shore Day 3

I awoke at first light, had a couple pre-boiled eggs and set off out of the creek. Tacking north toward Great Wicomico Light, Annie moved well against the light northeast wind. The wind slowly picked up and by 0900 it was back to 20 knots with the seas building with it. Under full jib and mizzen, we crabbed north on long port and shorter starboard tacks. I say crabbing for she would forge ahead to be knocked back a little as we crossed each wave. With a frequency of about 3 seconds the waves proved formidable. Breakers would catch us often and gusts occasionally dipped the lee rail as I quickly popped sheets. As I was getting tired I chose to crank the engine off Dameron Marsh and motor on to the light, into the Great Wicomico and Cockrell Creek toward Reedville.

The creek winded past large menhaden fishing boats and commercial docks. I tied up at a marina and had a tasty fried oyster sandwich at their small restaurant. A conversation with sport fisherman revealed what I suspected... fishing was lousy. A tournament was on but they seem to have substituted drinking beer at the bar to sloshing around in the chop.

A couple aboard an old buy boat invited me to drop by the following day as I headed out deeper up the creek in search of the railway my friend at the museum had told me about. I found it in Reedville proper and met George Butler, a third generation boatbuilder. He said I was welcome to tie up for the night. I took him up. 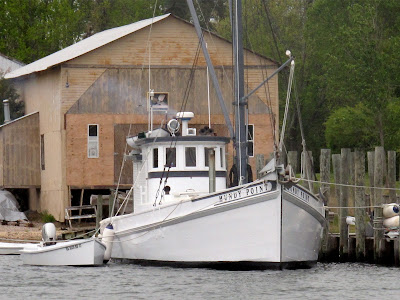