Up the Western Shore  Day 5

I had set my phone alarm for 3 am. Like I said my plan to catch a ride with fishermen to Gywnns Island was somewhat unresolved. So on the off-chance I awoke pulled on my pants and shoes, grabbed my keys and stepped on the dock to see a pickup driving off in the dark up the hill from the marina. Woops.

Back to the berth and after a few hours I was again listening to NOAA and readying Annie for another go at heading south. It didn't sound go... still piping out of the northeast, when a fellow drove up in the deserted parking lot. He wondered if the restaurant was open for breakfast. I told him no.

I said that I had missed a ride and was contemplating going out when he said "I'll take you, I don't have anything to do this morning. I'm stuck like you." He continued by saying that the storm had chased him back in at Smith Point as he tried to take his small skipjack down to coastal North Carolina where he lived. I offered to buy gas but he preferred breakfast instead.

So John and I found a place to eat outside of Smith Point and he showed me his boat. She was a shallow draft skipjack-style sailboat with a single raked mast rigged as a sloop. Pretty salty looking and heavy built. We headed south to Gwynns Island... about 40 miles and there I picked up the truck and trailer and headed back north. When I arrived John pulled up again and helped me haul out at a primitive ramp that the watermen use. We parted ways, he back to wait on a better day and I to drop off Annie and head home after a nice, somewhat rough, spring sail up the Chesapeake.

Sometimes things just work out... with a liitle help from a new friend. 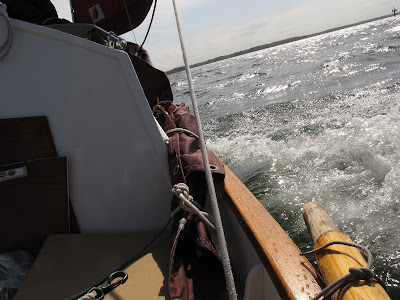