I awoke to a beautiful day. After a nice breakfast of 'fortified' MH Breakfast Skillet. I pulled out the painting composition book and continued drawing studies I had started in Oriental. Noticed people stirring on the shore and before long there was a kayak headed my way. The fellow pulled up alongside and when I introduced myself he immediately remembered me. We were acquaintances from college days and had many mutual friends. He has always gone by Boots and he had built the house on the bay where I was anchored. We reminiscenced for a while and he invited me to stay over and have dinner with he and his wife Lou. I had decided to work upriver to Washington (Little Washington to eastern Carolina folks) but agreed to stop back in later and take him up on his dinner invitation. Duh.


Light wind and a little kick from the motor carried us up river. The dockmaster in his golf cart pointed out a free tie-up slip and helped me by taking a line. We chatted and he said it was fine to stay while I explored the town. Grabbed a sandwich the size of a small canteloupe at the local bar, ate half and asked for a small bag of ice to keep it fresh.

I sat on benches and drew the architecture. Pretty quiet all and all... a few people passing from time to time. As I returned to Annie I noticed the wind had picked up from the east. Afternoons often bring a 'sea breeze' that funnels up the rivers that feed to Pamlico Sound. With it came a lot of  forest material dislodged by the rains and high water. The current was wind-driven and I fended off a large log that barreled down on Annie. It was time to go. 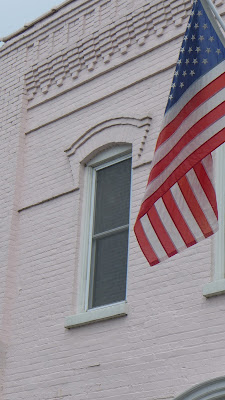 Motoring into a stiff headwind, we finally reached Blounts Creek as the sun went down. I slowly pulled up to Boots' dock, tied up and enjoyed a steak dinner and vibrant conversation. It is somewhat amazing we all survived the late 60s!

News...
My friend Steve is in the bay inside Cape Lookout on his current spring cruise. The Cape is a bit southeast of Harkers Island. Did he enter from the north or run the inlet, go offshore and slip in from the west? Will find out later but I sure of one thing... he is having a great time.
Posted by Curt at 11:42 AM
Email ThisBlogThis!Share to TwitterShare to FacebookShare to Pinterest