Woke to a cold 44 degree first light, sun still below the horizon. I grabbed a breakfast bar and an apple and started retracing my entry from the night before. Reaching the far east buoy I received a 6:19 message from Steve. He was headed south, down the Pungo and east toward my area, traveling along the south shore of the Pamlico River. Being about 12 nm away I tacked north into the river, scanning the horizon for his sails. After a couple hours and a number of up-close dolphin sightings we spotted each other and I fell off to broad reach for Pamlico Point and the vast Pamlico Sound.

I kept further offshore until we came in close to slip inside the bombing range. Running downwind we passed the Bay River and continued SW into the mouth of the Neuse River. The wind had clocked around to the SW funneling down the Neuse and making for numerous short-chop tacks. As the afternoon bore on Steve opted to turn in at Whittaker Creek, just shy of Oriental, to anchor in the light. I readily agreed having been out over 12 hours. Sweet potato Chicken Rice dinner, a bit of reading and lights out.    43.2 nautical miles 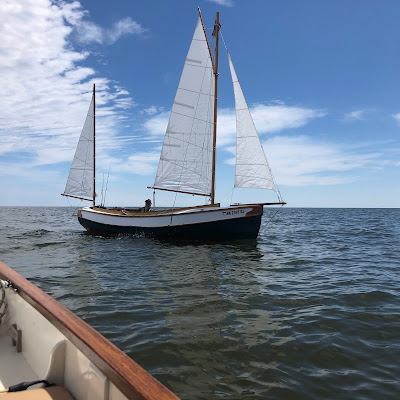