April 30 (one week before departure)

Annie has been at Morningstar Marina across from Gwynn's Island over the winter. I had received a notice that their rates were going up substantially and seeing that it only included a parking spot in a field, I started looking elsewhere. I did however, before leaving flush the engine, having been winterized. Problem: no water pumping through. I had not replaced the impeller since commissioning in 2007 for it had always worked perfectly. Guess that's no excuse for preventative scheduled maintenance. To further complicate I had not brought sufficient tools.

I was able to locate a kit. The yard had a guy that worked on motors but proved to be a bit challenged. He struggled with reattaching the shift linkage and I was charged less hours due to his shortcomings. Four hours (!) later she was pumping like a champ. 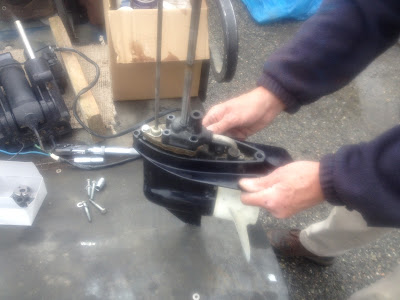 My gallery owner Ben invited me to move over to his house on East River below Mathews. We backed in beside a shed and I went home to wait out the rain prior to heading south.